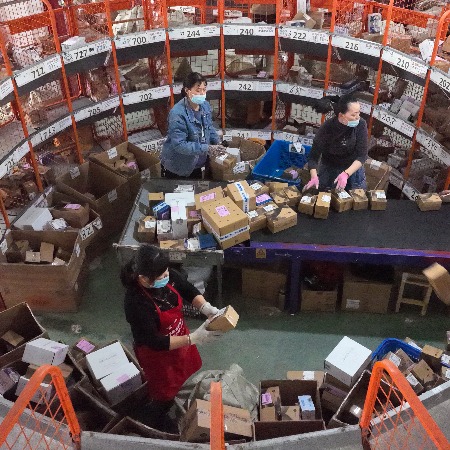 Despite focus on customer loyalty and rational buying, 11-11 rocks

Retailers, they said, are keen to find a balance between promotions and long-term quality growth amid the intensified competition from livestreamed shopping events, the lingering COVID-19 pandemic and a gloomy world economic outlook.

Although Singles Day remains a top priority for China's retailers, this year's festival has confirmed that consumers have become more rational and are carefully reviewing their needs, with focus on purchasing daily necessities and high-quality products, experts said.

For the first time in the history of Double Eleven, both Alibaba and JD, another prominent e-commerce platform, did not disclose their final GMV figures for this year's shopping spree. Alibaba just said this year's sales revenue was in line with last year's GMV of 540.3 billion yuan ($76 billion). Industry experts said the GMV growth has been slowing due to the impacts of COVID-19 disruptions and consumers' rising concerns about future economic prospects.

Wang Xiaofeng, principle analyst from research firm Forrester, said record-smashing GMV had come to characterize past Double Eleven festivals, but "chasing high GMV is no longer the focus. Instead, improving customer experience and loyalty are key. Both retailers and brands have learned the importance of loyal customers, particularly in major shopping events like Double Eleven."

A report released by global consulting firm AlixPartners ahead of 11-11 said the festival would remain the biggest shopping event of the year in China, but consumers appear to have spent their hard-earned money more selectively this year.

Sampling nearly 2,000 consumers across different age groups and regions in China, the survey, conducted before 11-11, found that almost 60 percent of respondents intended to spend more this year compared to last year, while 14 percent planned to spend less amid the increasingly complicated economic environment and the rise of spending on products produced using sustainable practices.

The survey also found the value of goods and services has become a key consideration for consumers. While overall consumption remains stable and strong, 39 percent of all surveyed consumers said they pay more attention to product quality and will only spend when they have adequate product information.

The report said as global economic downward pressure might weigh on consumer sentiment and retail sales, some shoppers have become more cost-conscious. And 34 percent of all respondents said they would think twice before spending and would only spend when necessary.

"Almost half of surveyed consumers planned to increase their spending over last year on daily necessities, followed by purchases of clothing, fashion items, footwear as well as household and lifestyle products. In contrast, 39 percent of interviewees had no plans to purchase luxury goods during this year's event," said Justin Koh, senior vice-president of AlixPartners.

Some 88 percent of interviewees said they also participated in other discount festivals throughout the year, but the 11-11 campaign remains the most attractive discount bonanza.

The purchasing frenzy was in evidence as sales boomed on the grand opening day of the shopping event that kicked off at 8 pm on Oct 31, four hours earlier than in previous years. Data from Tmall, one of Alibaba's business-to-customer platforms, showed the turnover of 102 brands surpassed 100 million yuan each in the first hour of its promotional campaign.

Sales of home appliance products via JD's online marketplaces exceeded 1 billion yuan in the first minute of the gala, while the transaction volume of mobile phones such as Oppo, Vivo, Samsung and OnePlus surged 100 percent year-on-year in the first 10 minutes of the promotion, according to JD.

Moreover, 253 homegrown cosmetics and skincare brands saw sales skyrocket more than 100 percent year-on-year in the first 10 minutes, while sales of more than 1,500 outdoor sports brands skyrocketed 100 percent on a yearly basis during the brief period.

"Consumption plays a fundamental role in China's economic development and is the main driving force boosting economic growth," said Wang Yun, a researcher at the Academy of Macroeconomic Research.

Wang highlighted that Singles Day has played a vital role in stimulating consumer purchasing appetites, shoring up the confidence of shoppers and promoting the recovery of consumption.

"Chinese consumers have become more rational and paid more attention to the value of the things they buy during this year's shopping spree," Yu said, adding online retailers should take a longer-term perspective and regard Double Eleven as a very important part of their marketing strategies throughout the year.

"Retailers need to launch new products to attract a breed of new consumers, especially the young generation, and even the elderly people, with greater emphasis on establishing brand image. They should not only take the shopping festival as a gateway to boost sales, but also a significant opportunity for brand building," he said.

The country has rolled out a raft of measures to promote consumption recovery, including boosting consumption in key fields like automobiles, green and intelligent home appliances as well as catering and accommodations.

"Pursuing high-quality development as our overarching task, we will make sure that our implementation of the strategy to expand domestic demand is integrated with our efforts to deepen supply-side structural reform," said a report delivered to the 20th National Congress of the Communist Party of China.

With economic activities generally perking up, China's consumer market warmed up in the third quarter. The country's total retail sales of consumer goods, a vital consumption indicator, rose 3.5 percent year-on-year in the third quarter, reversing the 4.6 percent decline logged in the second quarter, the NBS said.

"Even with the changes in consumer behavior, the COVID-19 pandemic and the impact of global macroeconomic conditions, Singles Day continues to be a priority for Chinese retailers," said Kelly Liu, head of retail practice from consultancy Bain & Company Greater China, adding the engagement is now being driven more by customer loyalty.

In addition, Chinese consumers are increasingly shopping across multiple platforms, as 69 percent of respondents said they planned to visit three or more platforms, up from 56 percent in 2021, according to a report from Bain & Company published before Double Eleven.

Strikingly, 37 percent of interviewees planned to use five or more platforms this year. The company polled some 3,000 Chinese customers on their attitudes toward the annual shopping gala.

China's retail sector has entered a "fight for loyalty" stage, with its focus shifting from headlong growth to retaining customers and building profitability — all while taking a more integrated approach to online and offline channels, the report said.

As the event matures, it has become more of a component of a larger strategy that engages with consumers on an ongoing basis year-round across platforms, it said.

Zhao estimated the country's consumer market is likely to gain growth momentum in the coming months, fueled by better containment of the COVID-19 pandemic and a series of supportive policies to shore up consumption gradually taking effect.

She also called for efforts to encourage enterprises to use new-generation information technologies such as big data, cloud computing and artificial intelligence to create new types of green and intelligent consumer goods and cultivate new consumption growth points.