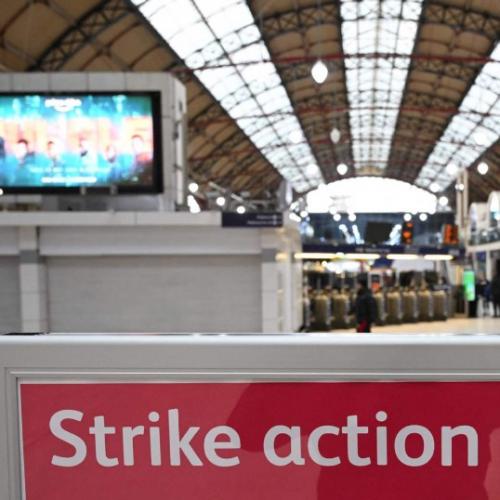 LONDON - A series of large-scale strikes are set to disrupt daily life in the United Kingdom (UK) over the next few months, due to long-running disputes over pay. The walkouts are expected to take a huge economic toll.

Strikes on the London Underground will go ahead on Thursday, after the government body Transport for London (TfL) and trade union representatives failed to reach an agreement. The unions had asked TfL to pause job cuts and changes to pensions.

"Our members are resolute in their determination to see a just settlement to this jobs and pensions dispute," said Mick Lynch, general secretary at The National Union of Rail, Maritime and Transport Workers. "They will continue their industrial campaign for as long as it takes."

TfL has warned that there will be "limited or no services running" on Thursday, and passengers should avoid traveling on the Tube.

London Underground handles up to five million passengers a day, according to TfL. At peak times, there are over 540 trains running around the capital.

Meanwhile, starting on Nov 18 around 700 workers at London's Heathrow airport will participate in three days of strike action over pay. These workers are responsible for a wide variety of roles, including ground handling, airside transport and cargo, said Unite, one of the largest trade unions in the UK.

The strike will particularly affect Qatar Airways, which has scheduled an additional 10 flights a week during the World Cup, which starts on Nov 20. Passengers returning to the United States for the Thanksgiving holiday are also set to be adversely affected, Unite said.

Next, more than 70,000 university staff at 150 UK universities will strike for three days at the end of November over pay, working conditions and pensions. The strike will be "the biggest ever to hit UK universities and could impact 2.5 million students," the University and College Union (UCU) said on Tuesday.

UCU's demands include a meaningful pay rise to deal with the cost-of-living crisis, after employers granted a pay rise worth just 3 percent this year. This followed over a decade of below-inflation pay rises, the union underlined.

More than 300,000 members have been urged to vote for strike action in the Royal College of Nursing's (RCN) biggest strike ballot in its 106-year history. The ballot was closed in early November, with results set to be announced at a later date.

"None of us wants to take industrial action but we've been forced into this position after a decade of real-terms pay cuts. We can't stand by and watch our colleagues and patients suffer anymore," said RCN General Secretary Pat Cullen.

Driven by rising food prices, Britain's Consumer Price Index (CPI) rose by 10.1 percent in September. In the last few months, households have felt the squeeze due to persistently high inflation, which has heated up disputes over pay.

The UK has also seen a summer of walkouts by staff in sectors including public transport, container port operation and postal delivery. The walkouts have taken a huge economic toll.

As well as the huge impact on day-to-day life, economists have assessed that the first wave of rail strikes alone, in June 2022, cost the UK economy nearly 100 million pounds (114 million US dollars). This put extra pressure on business, and stopped people across the country from accessing their workplaces during a cost-of-living crisis.