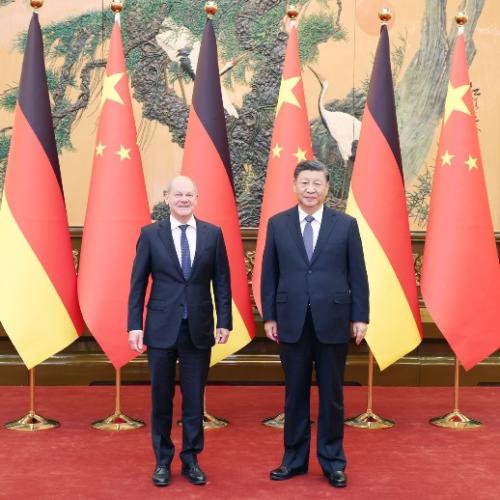 In a whirlwind visit to China on Friday by German Chancellor Olaf Scholz, Beijing and Berlin sent clear signals on opposing protectionism and keeping their collaboration afloat amid global economic downturns and geopolitical conflicts, officials and experts said.

During his 12-hour stay in China, Scholz became the first European leader to visit the country since the 20th National Congress of the Communist Party of China concluded last month. He also was on his first visit to China after assuming office as German chancellor in December.

This year, the two countries are celebrating the 50th anniversary of their establishment of diplomatic ties.

During the talks with Scholz, President Xi Jinping underscored the need for the two major countries of great influence to work hard in times of change and instability and contribute more to world peace and development.

It is important that China and Germany respect each other, accommodate each other's core interests, adhere to dialogue and consultation and jointly resist disturbance from bloc confrontation and attempts to see everything through the prism of ideology, Xi added.

Scholz said Berlin wants to maintain communication and coordination with Beijing to better safeguard regional and global peace and security.

Regarding issues on which the two countries' positions diverge, Germany is willing to exchange views with China to increase mutual understanding and trust and to stabilize, cement and grow bilateral ties, he said.

China will work with Germany and Europe to further deepen aviation cooperation, conduct exchanges in the fight against COVID-19, increase interactions and mutual learning on green development and ecological conservation, and encourage more people-to-people exchanges, he said.

On China-Europe ties, Xi said China remains true to the belief that its relations with Europe are not targeted at, dependent on, or subjected to a third party.

The more complex and difficult the situation becomes, the more important it is for China and Europe to uphold mutual respect, mutual benefit, dialogue and cooperation, he added.

Germany opposes bloc confrontation for which politicians should be held responsible, Scholz said, adding that the nation will play its role in furthering Europe-China relations.

The two leaders also exchanged views on the Ukraine crisis.

Xi and Scholz had in-depth exchanges on China-Germany ties, China-Europe ties and major issues, and the length of the talks exceeded expectations, Vice-Foreign Minister Deng Li told China Central Television after the meeting.

Wang Peng, a research fellow at Huazhong University of Science and Technology's Institute of State Governance, said that the visit to China came at a time when the United States is stepping up political manipulation and economic exploitation of Europe amid the lingering Ukraine crisis.

Berlin has made its decision by making the visit happen, Wang said, adding that there are no direct geopolitical, military or security conflicts between the two countries.

"The corporate executives of major German enterprises coming alongside Scholz to China best illustrates the resilience of China-Germany ties as well as China's global attraction in an economic context," he said.

Ding Chun, director of the Center for European Studies at Fudan University, said that Scholz, as leader of the largest economy in Europe, took the initiative to visit China following the outbreak of the pandemic, sending the signal that Germany is willing to keep its relations with China afloat, particularly in economic and trade areas.

"Although not all issues between China and Germany could be resolved overnight through this one visit, face-to-face communication and actions to secure cooperation and dialogue are win-win for both sides," he added.