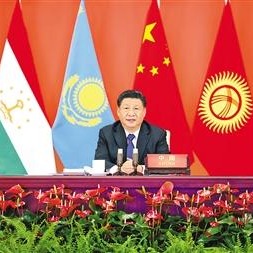 BEIJING -- Ahead of President Xi Jinping's state visits to Kazakhstan and Uzbekistan, politicians and scholars from the two countries said Tuesday that they expect the trip to promote regional cooperation and bring bilateral ties to a higher level.

The Chinese president will attend the 22nd meeting of the Council of Heads of State of the Shanghai Cooperation Organization (SCO) in the Uzbek city of Samarkand, and pay state visits to Kazakhstan and Uzbekistan from Wednesday to Friday.

This year marks the 30th anniversary of China-Kazakhstan relations.

On Tuesday, a signed article by Chinese President Xi Jinping titled "Build on the Past to Make Greater Strides in China-Kazakhstan Relations" was published on the Kazakhstanskaya Pravda newspaper.

In the article, Xi said that "China-Kazakhstan relations have long become rock-solid. We should cherish this hard-won achievement, and work harder to carry on the cause of friendship between our two countries."

"The article impressed me so much. It was so global, filled with deep thought," said Serik Korzhumbayev, editor-in-chief of the Delovoy Kazakhstan newspaper. "President Xi outlined directions for the further development and strengthening of bilateral relations."

Recalling the Silk Road Economic Belt initiated by Xi in a speech delivered at Nazarbayev University in Kazakhstan in 2013, Chairman of the People's Party of Kazakhstan Yermukhamet Ertysbayev said "this will give a powerful additional boost to the socio-economic development of a huge intercontinental region from the Pacific Ocean, to the Baltic, to the Mediterranean Sea."

"This (visit) is the first in five years. It is symbolic in the sense that this year marks the 30th anniversary since the establishment of diplomatic relations (between the two countries). This is a very important milestone," said Timur Shaimergenov, deputy director of the Library of the First President of Republic of Kazakhstan.

Shaimergenov expressed the hope the visit will help facilitate the implementation of the consensus reached between the two countries and promote the Belt and Road cooperation.

Gulnar Shaimergenova, director of the China Studies Center in Kazakhstan, said that Xi's visit demonstrates that China attaches great importance to its relations with Kazakhstan, and will give a strong impetus to the further deepening of bilateral relations.

"President Xi's visit is of extraordinary significance for the development of the permanent comprehensive strategic partnership between the two countries," said former SCO Secretary-General Bolat Nurgaliyev.

On Tuesday, a signed article by Xi titled "Working Together for a Brighter Future of China-Uzbekistan Relations" was published on leading Uzbek newspaper Narodnoe Slovo and Uzbekistan National News Agency (UzA).

In the article, Xi said "this year marks the 30th anniversary of China-Uzbekistan diplomatic ties. Over the past three decades, the giant tree of our relationship has taken deeper roots and grown more exuberant. The two countries have respected each other, fostered good-neighborliness, strengthened solidarity and pursued mutual benefit. Cooperation across the board has yielded concrete results."

"I am particularly proud that the signed article has been published on our newspaper," said Ruslan Kenzhaev, deputy editor-in-chief of the Narodnoe Slovo newspaper.

"The article made an excursion into the 2,000-year history of friendly exchanges, and summarized the achievements of 30 years of diplomatic relations in the modern era. The Chinese leader outlined his vision of the direction in which the strategic partnership will develop for the benefit of the people of the two countries," he added.

Abduvali Saibnazarov, an Uzbek expert on socio-political issues, said that Xi's article contains ways to solve some social issues that Uzbekistan will have to study in further cooperation with China, like in the field of poverty reduction.

"President Mirziyoyev has repeatedly stated that Uzbekistan will cooperate with China in the field of poverty reduction," he added.

Gulshada Urazalieva, an associate professor of the Uzbek National University, said that she is mostly concerned with enhancing cultural and people-to-people exchanges between Uzbekistan and China.

The professor expects the two countries to continue expanding cooperation in areas including exchanges between women, and "jointly build a wonderful future for the Chinese and Uzbek people."