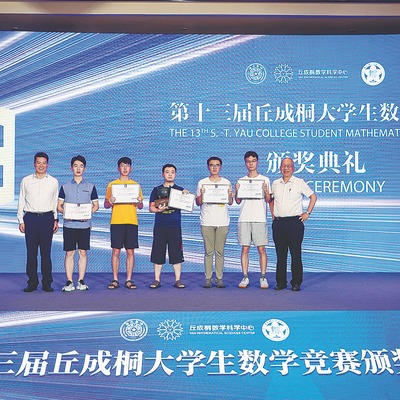 Formula for math success gets boost

Guan Dian, who is about to enter his third year at Tsinghua University in Beijing studying math, took part in the 13th Shing-Tung Yau College Student Mathematics Contest recently.

The 20-year-old, who has been interested in math since he was in junior middle school, won a bronze medal in the competition for applied and computational math, and that has spurred him to go further in the field.

"What I like about math is that it is so logical and so precise," Guan says.

"My deepening understanding of the subject through continuous learning has encouraged me to press on and learn more."

The contest was first held in 2010. It was organized by mathematician Shing-Tung Yau, who 40 years ago became the first Chinese winner of the Fields Medal, the highest award in mathematics. The competition he set up aims to check students' all-round ability and knowledge in math, and promote the growth of knowledge of the subject in China.

Yau's motivation for setting up the contest was his belief that many Chinese universities had not been able to offer the full range of required mathematical courses, and thus students were lacking in solid fundamental knowledge and skills for further study.

"I noticed many Chinese students majoring in math performed poorly in their qualification exams for PhD studies at overseas universities, and I wanted to change that."

"Unlike other math competitions, this one stresses students' extension of their knowledge rather than their ability to answer questions," Guan says.

There are six areas of competition: geometry and topology; algebra, number theory and combinatorics; probability and statistics; applied and computational mathematics; analysis and partial differential equations; and mathematical physics－the last of these having just been added.

Students can sign up for one or more subjects in individual contests, and there are gold, silver and bronze medals for each subject.

In addition to individual contests, there is an individual overall award to honor students who perform well in several subjects, and a team contest.

Shiu-Yuen Cheng, president of the organizing committee, who is also a professor at Tsinghua, says that more than 3,200 students from 525 universities entered the contest, twice the number of last year, and it ran more than six months. After a written exam last month, 93 students reached the final, which consists of a written exam and oral quiz. There were 68 prizes.

Over the past 12 years, more than 16,000 undergraduates have taken part in the contest, among whom 720 have won prizes, and many have gone on to conduct excellent mathematical research, Cheng says.

Yau says that in the years since the contest was first held, his aims for establishing it have generally been realized, at least in some universities.

"Universities tend to impart all the required basic knowledge to students in class now," he says.

Students performed well in this year's contest, and the gap between recent contestants and the best students he has ever met has narrowed, he says.

One of the prize winners, Zeng Xiangru, 20, of the University of Science and Technology of China in Hefei, says the contest is quite different from other math competitions.

"Many of the others mostly involve written exams, but in this one, the oral quiz requires you to express your ideas through explanation and writing on the blackboard. It can reflect something that other exams cannot show, especially your expressiveness and reactions."

Guan says: "Through dealing with many mathematical scholars, we have learned about them and their research fields, something that encourages us to think about what research direction we plan to choose."

Hu Yuqi, a math major at Tsinghua, gave a talk about Polish logician and mathematician Alfred Tarski. It was one of a series of lectures organized by Qiuzhen College, Tsinghua, of which Yau is the dean.

The aim of the lectures is to make profound math more accessible to ordinary people, says Yau, who also established the lectures.

"Math culture in China leaves a lot to be desired. Many teachers and parents believe math is difficult and boring. Their attitudes may adversely influence students. I want to make students know that math is interesting and keeps evolving."

Earlier lectures in the series were given in Guizhou, Zhejiang and Jiangsu provinces and in Guangxi Zhuang autonomous region, in which stories were told of Leonhard Euler (18th-century Swiss mathematician), Archimedes, Rene Descartes (17th-century French scientist) and others.

"Training a talented scholar is not a quick job," Yau says. "We are very clear that we must endeavor not only to impart math knowledge to students, but also cultivate them to understand the culture of math.

"Making our students know what the great mathematicians learned and experienced, what their opinions were, and how their research influenced math is very important. That helps us make our own discoveries."