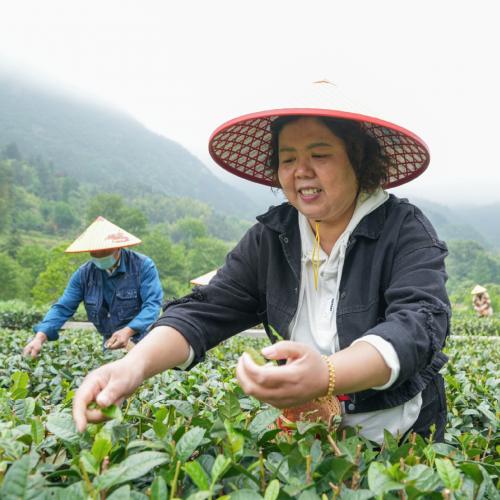 Editor's note: China Daily is publishing a series of stories reviewing President Xi Jinping's visits at home and abroad in the past decade, to showcase his vision for development in China and the world.

Just six years ago, life was hard in Dawan, a village in Anhui province where He Jiazhi has lived all his life. Young people were moving to big cities, leaving mostly elderly residents behind.

The village in Jinzhai county used to typify rural poverty in China. Many locals lived in run-down homes, and most people relied on meager incomes from sales of farm produce. It was also hard to reach the village, which is deep in the mountains.

When Xi Jinping, general secretary of the Communist Party of China Central Committee, visited Dawan in April 2016, he spent more than four hours on the road, including one hour on a winding mountain route connecting the village with the outside world.

Xi gained an impression of the impoverished villagers' lives, said He, the village's Party chief, who has vivid memories of the visit.

Xi's first stop was the home of Chen Zeping, whose wife has difficulty moving her right arm. The couple also lost their only son to a traffic accident.

"Xi asked Chen to show him the rice he had grown, and then inquired whether he had enough to eat. Xi also looked at the couple's bedding, asking if it protected them from the cold. Furthermore, he was interested in the channels they could access on their old television," He said.

After visiting another four homes, Xi sat down with villagers and local officials in the yard at the home of Chen's brother, Chen Zeshen, who was also living below the poverty line.

After listening to the villagers' comments, Xi made a powerful appeal for the nation to ensure that no one was left behind in the anti-poverty drive.

Since being elected the top Party leader in November 2012, Xi has made more than 50 inspection trips to poor regions, including all the nation's 14 contiguous poverty-stricken areas. He has also chaired seven symposiums on poverty reduction.

With the CPC due to hold its 20th National Congress in the second half of the year, analysts have highlighted Xi's dedication to overseeing a 10-year effort that lifted nearly 100 million rural residents out of poverty and ensured that poverty was eliminated in all 832 national-level poverty-stricken counties by 2020.

Chen Zhigang, dean of the China Academy for Rural Development at Zhejiang University and senior research fellow at the International Food Policy Research Institute, said that fighting poverty has been the centerpiece of Xi's domestic agenda, and the strong emphasis he has placed on this issue has been a key factor underpinning the nation's phenomenal success in this regard.

The significance of targeted poverty alleviation, a strategy first put forward by Xi during a visit to Shibadong, an impoverished village in Hunan province, was highlighted by Chen Zhigang.

Xi sat down with the family of Shi Basan at their rundown home. Shi, from the Miao ethnic group, did not initially know who Xi was, as the family could not afford a TV. Xi later sat with residents in a front yard, asking them about their lives and proposing solutions to their problems. He said the factors that led to poverty in each household must be identified so that targeted solutions could be introduced.

The visit to Shibadong was the precursor to a national poverty registration program, in which all rural households living below the poverty line signed on before being provided with targeted aid packages.

To help the poverty alleviation effort, at least 250,000 work groups and more than 3 million government employees were sent to impoverished villages, a key factor that contributed to the campaign.

Yu Lerong, a professor of rural development at China Agricultural University, said the nation's poverty reduction efforts were felt the most in remote mountainous and valley areas.

She added that such areas, mostly located in underdeveloped regions of western China, posed the biggest challenge to the national poverty reduction campaign.

"To ensure that areas stricken by extreme poverty could enter a moderately prosperous society, China came up with a policy mix that mobilized support from different sectors of society," Yu said.

Xi showed particular concern for children from a clifftop village in Zhaojue county, Liangshan Yi autonomous prefecture, Sichuan province, who navigated a series of wooden ladders to travel between their homes high in the mountains and school.

He told national legislators from Sichuan in March 2017 that he found it distressing to read news reports about the children and the "cliff village".

Xi visited Zhaojue in February 2018－a trip that included more than 70 kilometers of winding roads over a 3,200-meter-high mountain.

Sitting beside a fireplace with villagers from the Yi ethnic group, Xi pledged to leave no one behind in the nation's poverty alleviation drive.

"The purpose of socialism is to enable people to live happy lives, a goal that can only be attained without leaving any ethnic group, family or individual behind," he said.

He also stressed that education is a fundamental solution to poverty in areas such as Liangshan, adding that China must not let any child "lose at the starting line".

To enable people in the least habitable areas to live better lives, from 2012 to 2020, more than 9.6 million residents were relocated to homes with improved facilities.

Rundown homes occupied by 7.9 million households, or 25.68 million poor people, were also renovated as part of a broader drive for underprivileged groups to enjoy better housing conditions, healthcare and education.

For the transformation in poverty-stricken regions, from 2012 to 2020, China allocated total investment of about 1.6 trillion yuan ($247.97 billion), including 660.1 billion yuan from the central budget.

Alan Piazza, a former rural development economist with the World Bank, said the priority placed by Xi on poverty reduction is one of the key reasons for China's resounding success on this issue.

"One thing that Xi has done so well is to elevate poverty reduction to the No 1 task. He made this the priority for all of China, for all of civil society, all provinces, all companies. Everyone was focused on achieving the 2020 goals. Without this, we would not be where we are today," he said.

Chen, from Zhejiang University, said the fact that China has met the goal of lifting its entire rural population out of poverty is even more significant now, as the COVID-19 pandemic has led to a rise in global poverty and threatened to derail the UN 2030 Agenda for Sustainable Development.

He added that China's greatest contribution to global food security is to successfully feed its 1.4 billion population, and the nation must continue its high level of investment in rural areas and farming to keep narrowing the urban-rural divide.

Yu Xiaohua, a professor of agricultural economics at the University of Goettingen in Germany, said China's success in alleviating poverty and ensuring that underprivileged groups have access to sufficient food and other basic necessities represents a major contribution to the 2030 Agenda for Sustainable Development.

During the poverty reduction drive, the nation also accumulated vital experience for social development, including ways for the government to coordinate resources from different sectors and to help disadvantaged groups more effectively.

To consolidate its achievements, China introduced a transitional period for areas and families that had just shaken off poverty－pledging to resolutely prevent its recurrence on a large scale and to further promote the vitalization of rural areas.

Last year, Xi told a gathering marking the nation's poverty alleviation accomplishments: "We don't have any reason for exaggerated pride, self-satisfaction or complacency. We must build on this momentum and continue with persistent efforts."

Xi's visits to villages such as Dawan and Shibadong set in motion massive efforts to improve infrastructure, public services and develop industries to create jobs for local residents.

With government funds pouring in, poverty-stricken residents in Dawan were relocated to two-story homes, with many locals selling produce such as tea, peanuts and mushrooms to tourists who flocked to the area after road improvements were made.

According to He, the Dawan Party chief, the most remarkable difference now is that the villagers are full of confidence and optimism about the future.

"Previously, some poor families mostly relied on the government's aid packages to get by. Now, the abundant opportunities to find work have enabled them to improve their living standards," she said.

"Changes have not only taken place in the way the village looks, but also in the residents' outlook," she added.