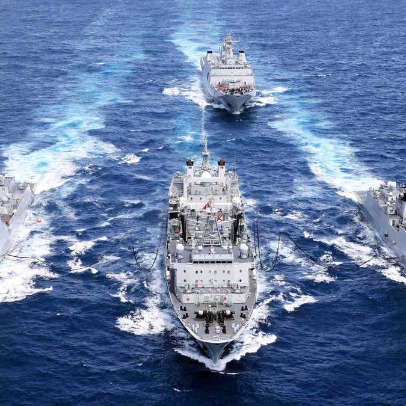 Global ocean governance has now entered a new stage of structural adjustment and order change, and the effects of various ocean issues on a regional and global scale have become increasingly prominent.

China and South Korea are countries with opposite or adjacent coasts as defined in Articles 74 and 83 of the UNCLOS. The two sides have no disputes over the territorial sovereignty of islands or reefs. China and South Korea face a geographical framework of maritime delimitation in the southern part of the Yellow Sea and the northern part of the East China Sea, with overlapping claims in EEZ and continental shelves.

The year of 2022 is the 40th anniversary of the adoption of the UNCLOS. Article 123 of the UNCLOS provides the cooperative obligations of coastal states in closed or semi-closed seas. These obligations involve the management, conservation and development of marine living resources; marine environmental protection and preservation; marine scientific research; and cooperation with other countries or international organizations. To a certain extent, they are closely related to maritime law enforcement activities.

In 2000, China and South Korea signed the Fisheries Agreement as a provisional arrangement before maritime delimitation. According to the China-Korea Fishery Agreement, the maritime law enforcement agencies of the two sides participate in the fishery committee mechanism, and take turns to hold law enforcement talks, conduct joint cruises and exchange officers on ships. In the past few years, the cooperation has played an active role in promoting stability of the yellow sea between the two countries and has achieved important results. The maritime law enforcement cooperation between China and Korea is carried out and promoted in the form of provisional arrangements before dispute resolution.

According to international law, the parties to the dispute should make every effort to make practical temporary arrangements based on the spirit of understanding and cooperation before the dispute is resolved. From 1997 to 2008, China and South Korea held 15 rounds of consultations on the law of the sea or maritime affairs. In 2015, China and South Korea officially launched maritime delimitation negotiations and established a three-level negotiation mechanism consisting of a government negotiating delegation headed by the Vice Minister of Foreign Affairs, a department-level negotiation working group and a few technical expert groups. As of June 2022, the two sides have conducted two rounds of negotiation and consultation at the deputy ministerial level and nine rounds at the department level.

The issue of maritime delimitation between China and South Korea should be viewed from a strategic and overall perspective. Whether it is for China or Korea, among the unresolved maritime disputes, the delimitation of the Yellow Sea is less sensitive, less difficult to resolve and less externally involved.

Practice has proved that if the disputing parties have the good will to solve the problem in good faith, eliminate external interference and patiently conduct consultations on the disputed issue, they will be able to find a way to resolve the dispute through negotiation. The settlement of the maritime delimitation issue between China and South Korea through negotiation will be conducive to the long-term stability of the Yellow Sea and the peace and stability of the surrounding environment. The agreement on maritime delimitation would further eliminate unstable factors in the relationship between the two countries, promote bilateral and regional cooperation including maritime governance and, at the same time, bring a positive demonstration for regional countries on how to resolve maritime disputes.

There is no clear provision in international law as to whether the parties concerned should make special arrangements for the fishery issue during the maritime delimitation, and the parties concerned have no general obligation to choose a solution path. This issue depends on the consensus among states. The fishery issue is unavoidable between China and South Korea in the delimitation negotiations. The maritime law enforcement agencies of the two countries can discuss the establishment of a joint law enforcement mechanism and formulate a code of conduct to regulate procedures, standards and measures to avoid violent incidents.

It's also important to ensure sustainability of China-Korea maritime law enforcement cooperation. Over the past few years, the leaders of China and South Korea have maintained a closed exchanges. This has played a positive role in diminishing differences and promoting cooperation between the two sides. In international practices, any maritime law enforcement cooperation that has achieved substantial progress is the result of the long-term accumulation and continuous operation of parties. China and South Korea could also consider establishing a maritime emergency response mechanism and carrying out regular cooperation in areas such as marine disaster rescue, ship pollution prevention and control, and maintenance of waterway safety, to increase the supply of international public goods in the yellow sea in the future.

Ding Duo is deputy director and associate research fellow, the Research Center for Ocean Law and Policy at the National Institute for South China Sea Studies.

The opinions expressed here are those of the writer and do not necessarily represent the views of China Daily and China Daily website.