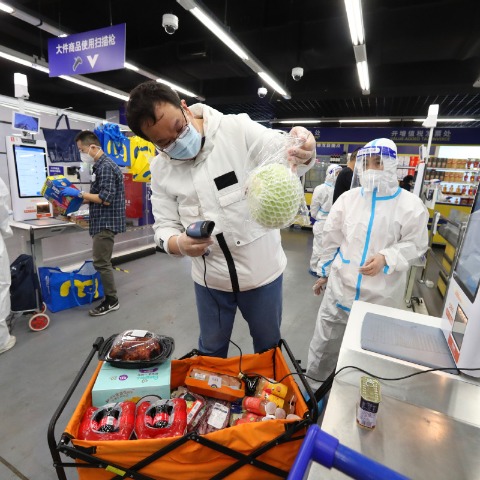 Membership stores that have targeted affluent urban consumers have kept their expansion plans this year as demand is on the surge for affordable and quality merchandise.

Metro China, a high-end retail subsidiary of Beijing-based Wumart Group, said their scale-up plan is still on track this year both online and offline, following a new store opening on Wednesday in Beijing.

The new store in the Sijiqing area in Haidian district in Beijing is the fourth store in the city, with an area of 7,500 square meters and houses more than 8,000 types of merchandise from 60 countries. Of them, more than 40 are imported or of private brands. Health, maternity, cooking and gifting are four major categories the new store is offering. To keep consumers coming back to the stores, about 20 to 30 percent of the merchandise in Metro's membership stores will be replaced with new products every three months, said the company.

"Metro's global procurement office has imports based on the best origin of products to better meet the members' needs for high quality," according to Chen Zhiyu, deputy chief operating officer of Metro China.

Metro's strengths in operation capacity, procurement scale and quality control have been generated from its yearslong expediences in providing products for business operators including five-star hotels, international kindergartens and government institutions as well as enterprise clients.

The business-to-business sector has accounted for 30 to 40 percent of its total revenue, with more than 1,000 employees serving 100,000 enterprise members, said Chen.

The retailer is opening more stores in the country in addition to upgrading its existing outlets to membership format. Metro China is expected to open its fifth membership store in Beijing and other new outlets in Shanghai and Wuhan, Hubei province, by the end of this year.

Empowered by Dmall, the digital unit invested by Wumart's founder Zhang Wenzhong, Metro has also boosted its integration of online and offline businesses and deliver-to-home capacities, said the company.

Its online orders have been on the rise since the outbreak of the COVID-19 pandemic. For instance, at its mall in Shilihe, Beijing, online orders have grown 10 times over the same period last year during the May Day holiday early this month.

Within five kilometers of its Metro stores, Dmall has enabled citywide delivery at all of the Metro stores in the country, where consumers can have better access to products available at Metro.

The country's top membership store Sam's Club, owned by Walmart Inc, is expected to open its fourth store in Daxing district of Beijing and Hema Fresh has planned to have its second membership store in the city. Sam's Club said earlier it will operate 40 to 45 stores by the end of this year. In China, Sam's Club has led the sector with 4 million paid members and 36 stores. In its first-quarter fiscal report, released on May 17, Sam's Club's global sales increased 10.2 percent, with membership income increasing by 10.5 percent.

"Membership stores will continue their strong momentum this year, amid more fierce competition, resulting from the rising number of players who have joined in the sector," said Jason Yu, general manager of Kantar Worldpanel in China.

"The ongoing pandemic and disruption in logistics have required quicker responses from retailers, where those with better supply chains have a clear advantage."

Affordability and quality of products are what matter more to consumers amid the pandemic, he added. Stock-up shopping often spurs businesses for membership stores, Yu said.