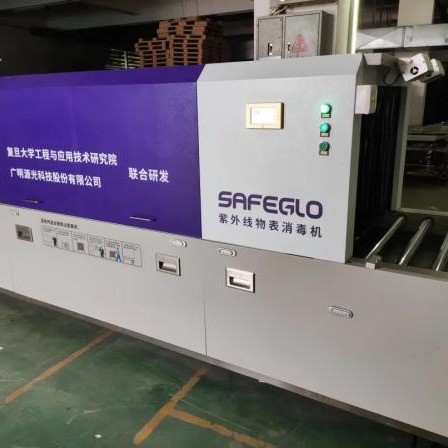 Equipment that can disinfect, including robots, developed by teams from Shanghai-based Fudan University have been deployed on the university's campuses to safeguard the health of staff and students amid the COVID-19 wave in the city.

The university says the gadgets, including fixed equipment for disinfecting large boxes, mobile intelligent robots that can perform precise disinfection tasks, and small, luminous disinfection lights for lifts, will serve as tools to stop the spread of the virus from objects to people. Some of the devices are also being used in public spaces outside the university. For example, a robot has been used to disinfect chairs at railway stations in several cities and subway carriages.

The university says its Academy for Engineering and Technology and School of Information Science and Technology took just seven days to produce the equipment after the call for such tools was issued by authorities in mid-April.

Gan Zhongxue, deputy dean of the Academy for Engineering and Technology, says most disinfecting robots available in the market are only capable of disinfecting large areas through spraying and ultraviolet rays.

"The flexible disinfecting robot developed by Fudan can perform precise and fixed-point spraying, wiping and disinfection of specific targets," says Gan. "Also, thanks to an intelligent management and control system, the robots can perform high-quality sterilization more efficiently."

Yao Qi, a researcher from the Academy for Engineering and Technology, says a large device that is similar in appearance to airport security-check machines can disinfect the surfaces of a carton in seconds. Two smaller gadgets that have a similar function are currently being used to disinfect lifts.

"We anticipate that the technology, which guarantees sterilization effectiveness and efficiency while ensuring people's safety, can be applied to more scenarios," says Yao.

Another device, designed by Zhang Tianzi, a doctoral student at the School of Information Science and Technology, and his team, is an intelligent atomization machine that can disinfect surfaces of objects.

"Seeing how most of the supplies are packaged in cartons, which would get wet and disintegrate when dosed with disinfection liquid, we adopted the ultrasonic atomization solution so that the durability of the cartons is not compromised," Zhang adds.