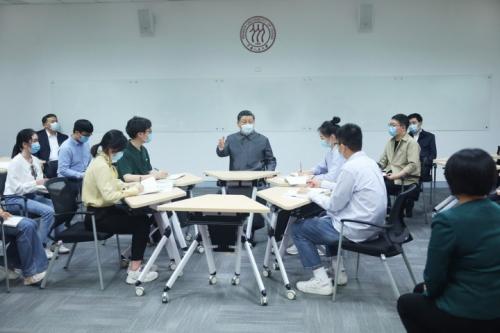 Inspired and motivated by President Xi Jinping's remarks during his visit to Renmin University of China, university students and faculty members said they are determined to build world-class universities with Chinese characteristics and follow the Party's lead to achieve national rejuvenation.

Xi, who is also general secretary of the Communist Party of China Central Committee, visited the university on Monday ahead of China's Youth Day, which falls on May 4.

He called on young people to blaze a new path in building world-class universities with Chinese characteristics, rather than following foreign standards and models.

Xi also emphasized that young people should follow the Party, strive for national rejuvenation, live up to the expectations of the era and the people, and achieve the best possible results.

Gao Mingxuan, a senior law professor at Renmin University of China, said as the first modern university founded by the Communist Party of China, it has remained committed to cultivating talent for the Party and the country. In the new era, the university will devote itself to nurturing more "pioneers for national rejuvenation and vanguards for a great country," he said.

"Although I am more than 90 years old, I am still motivated to set good examples for my students with good virtue and guide them to achieve overall development," he said.

Zhou Xiaohui, a PhD candidate at the university's School of Journalism and Communication, said he feels very fortunate to live in today's era and also knows the great responsibility which falls on the shoulders of young people.

Ma Wenjing, a postgraduate student at the Central University of Finance and Economics, said each generation has its mission and each generation is trustworthy. Young people should bear in mind the spirit of sacrifice of past generations and become pioneers and front-runners in fulfilling the mission of the great rejuvenation of the Chinese nation, she said.

Li Jinfeng, an undergraduate student at Tsinghua University's Department of Precision Instrument, said that in the past four years she has served as a volunteer at major events such as the 70th anniversary of the founding of the People's Republic of China in 2019 and the Beijing 2022 Winter Olympic Games.

These events have enabled her to witness firsthand the strength of the country and she feels deeply involved with the nation's development and future, she said.

"I have followed in the footsteps of many predecessors in devoting myself to the country's development in aeronautics and astronautics, and I hope I will make bigger contribution to national development and socialist modernization."

Gu Jiayun, vice-dean of the School of Asian and African Studies at Beijing Foreign Studies University, said that while foreign studies universities cultivate talents with knowledge in foreign languages and cultures, they are still deeply rooted in China and have distinct Chinese characteristics.

As China further reaches the center of the global arena, foreign language teachers need to be keenly aware of their responsibilities of introducing global culture to the country while also promoting the country's image worldwide so that people around the world can have a clear understanding of China's story and accept the peaceful rise of a responsible country, he said.

Luo Shixiao, a postgraduate student at Beijing Normal University's School of Marxism, said as a Marxism major, he will study, research and promote well the Party's innovations and results in Marxist theories.

"After we graduate, we will bring the Party's theory to our daily jobs, whether we are at grassroots level or posts of great significance to the national development," he said.