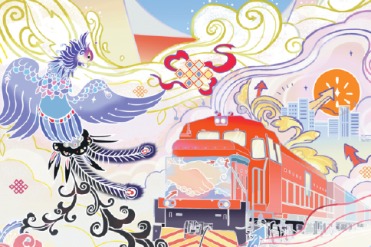 When then Italian vice-premier Luigi di Maio, Italian ambassador Ettore Sequi, myself and the whole Italian Conte I government worked on a memorandum of understanding for the Belt and Road Initiative in 2019, we knew that the world needed to improve trade, enhance common understanding, build mutual respect among different cultures and socio-economic systems, and promote people-to-people exchanges, but we didn't know we would be proven right during a major geopolitical crisis.

Not just because of the recent events in Ukraine or Afghanistan, but because of a much broader and more worrying "philosophical decoupling" that has, for some years, been altering the relationship between the West and China. Leaving aside the demographic and economic unbalance between the two blocks－the "West" with only 14 percent of the world population having 60 percent of the world's GDP－I see this decoupling being driven by two different approaches: China tends to worry mostly about its own internal affairs and not to interfere with the internal affairs of other sovereign states and has no intention to export its own social and economic model, while the West tends to take a more proactive role in its attempt to export its social and economic model to other parts of the world.

The West holds the view that economic development must be accompanied by an opening-up of the political system and perceives elections as being synonymous with democracy, while China's economic performance indicates that economic and political paths do not need to converge and that democracy is not to be measured simply, like the West believes, only by the electoral process. Rather, it should be measured by the results that the government offers to its citizens. The recent white paper on democracy released by the Chinese government lays emphasis on the difference between process-oriented and result-oriented democracies.

The MOU between Italy and China is intended to bridge these gaps and bring people from China, Europe and the West together. Our vision of cooperation includes academic, scientific as well as commercial exchanges. I myself may be one of the most vivid examples of such a vision, working for part of the year as a professor at the University of Nottingham in Ningbo, Zhejiang province, and spending the remaining months back in Italy to help the Italian and the broader European public understand the recent developments in China and inform corporations of any potential business opportunities.

And the information exchange also works in the other direction: one of the research projects I am working on with my students at Nottingham University is to analyze European reliance on Russian gas, a hot topic these days. By bringing current affairs into both the classroom and research projects, Chinese students have the opportunity to get some real-life experience and broaden their horizons beyond the standard theory taught at the University and this has given them an edge when looking to pursue higher degrees in China or in the West or exploring job opportunities. This is what I call the Belt and Road for young people: if young people start to learn about foreign cultures, when they become leaders in their own countries, they will be more likely to contribute to world peace.

The Belt and Road Initiative is related to larger infrastructure projects. Ironically, one of the criticisms we received when Italy joined the initiative was that Chinese companies could do some predatory acquisition of our strategic infrastructure, such as ports. Those who were responsible for the MOU knew from the outset that we did need to evaluate both the risks and opportunities, but we also realized that beyond the political rhetoric, almost all other European ports have Chinese involvement at different levels and at varying degrees, either via ownership such as in the Greek Port of Piraeus or via an operational concession such as in the Port of Rotterdam, hence the risk of Italy being singled out as the only country with a number of ports having a Chinese presence was zero.

But the story gets more interesting, as the Russian gas crisis has evolved: one of the main problems Italy faces now when trying to diversify its supply chain of gas is the limited port capacity, which is not enough to receive alternative supplies from large tankers arriving from gas-producing countries, such as the United States. Had we continued at the same speed with the development of joint Italian-Chinese port projects under the Belt and Road Initiative framework, today, we would be in a much better position to receive those shipments that would have benefited not only our own economy but even that of the US, which was critical of the Belt and Road Initiative. Today, they cannot fully exploit their competitive advantage in the energy sector exactly because of our limited port capacity.

Our vision would have created a win-win scenario for Italy, the US and even China which would, today, feel less international pressure in the global energy market. The project I am leading at Nottingham University aims at monitoring and analyzing not just gas, but all infrastructure developments in countries involved in the Belt and Road Initiative to inform the wider Western audience of the potential opportunities that exist. Any reader, think tank, university or government entity that wishes to be part of this initiative is welcome to contact me personally.

As I tell my students in Ningbo and my politician friends in Italy and Brussels, the Silk Road is always preferable to the tank road, and I truly hope that the saying "when goods cross borders, armies won't" soon becomes true and the Belt and Road Initiative will regain its role as the agent of social economic development in Asia, Africa, Europe and any other continent that wishes to join hands to work together for peace.

The author is a professor of finance at the University of Nottingham Ningbo China and former undersecretary of state at the Italian Ministry of Economic Development. The author contributed this article to China Watch, a think tank powered by China Daily.

The views do not necessarily reflect those of China Daily.