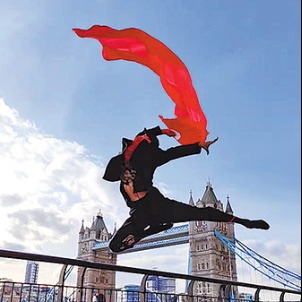 Dancing to a London beat

With simulated splits in the air, a man in black jumps high and shows different poses before landing on the ground gracefully. Sometimes, he carries a bright red silky fan while dancing or wears a shirt with long white flowing sleeves, while spreading his arms like wings in the air.

His dance is eye-catching, often attracting crowds that take pictures and ask what he is doing.

He is Chinese dancer-choreographer Ma Jiaolong, who has been making and sharing short videos of himself dancing in London since 2020. He has performed at the city's parks and iconic landmarks, such as Tower Bridge and Trafalgar Square. Ma has nearly 5 million followers on Douyin, a major short-video platform in China, known as TikTok overseas.

"I was surprised because I didn't expect that the videos would go viral. The best part of being recognized is to introduce Chinese classical dance to a wider audience," says the 35-year-old.

Ma has been teaching Chinese classical dance at Goldsmiths, University of London, since 2019, under a cooperative program initiated by the Beijing Dance Academy.

He says he started making the videos two years ago when his regular teaching job was affected by the COVID-19 pandemic. Like many other people, who worked from home, Ma had to give online courses. Besides teaching, he trained at home for at least two hours a day to keep his muscles strong and his body flexible.

However, Ma couldn't make big moves since his home was small. One day, Ma and his wife, who is also a dancer, went to a nearby supermarket and on their way back home, the couple passed Greenwich Park, a popular tourist site with beautiful views of London.

Ma's wife said to him: "Why not do some dance moves here that you couldn't do at home?" Then Ma jumped off the ground and did a 360-degree spin, which was recorded by his wife on her phone.

"Back home, I edited the video with music and sent it to my friends. Surprisingly, they loved it, which inspired me to share it online," says Ma.

Later, he made more short videos when he went out and put them online. "I simply considered that as a way of capturing memories of my life."

Ma says he enjoys dancing outdoors, which brings him closer to nature and helps him to focus on his breathing. Ma also likes to interact with strangers, who are curious about his performances.

After Ma's videos circulated widely online, he received lots of messages from people from around the world. Many of those watching Ma's videos were impressed by his ability to dance his moves perfectly, even while in the air. As Chinese classical dance involves movements based on martial arts, Ma has combined his dance moves with dazzling action.

"Now, making and sharing short videos have become a part of my life, and, most importantly, a great way to introduce Chinese classical dance to more audiences, especially those overseas viewers," says Ma.

Lyu Yisheng, a renowned Chinese dancer and former president of the Beijing Dance Academy, writes in an article on the aesthetics of Chinese classical dance: "The dance form is a result of Chinese dancers' creation based on traditional Chinese culture, like old paintings, sculptures and calligraphy. It has been developed since the People's Republic of China was founded in 1949."

When the dance academy was founded in 1954, Chinese classical dance had become a key subject for experts and Chinese dancers to practice and research.

According to Ma, the dance focuses on portraying different characters through subtle movements, such as hand gestures and eye contact.

"The dance form is a perfect blend of technique and artistry. For my students in the United Kingdom, who are not professional dancers, they learn Chinese classical dance as a way to understand traditional Chinese culture, rather than simply imitating my dance moves," Ma says.

Born and raised in Shijiazhuang, Hebei province, Ma started to learn Chinese classical dance at the age of 12. His parents supported his choice but they didn't expect that their son would take it as a career.

As a dancer with the academy's youth troupe, Ma gained his master's degree from the institute in 2014.

His devotion to dancing led him to a new approach to creating in the time of pandemic.

Ma Ming, a professor of the Beijing Dance Academy, who focuses his research on arts management and cross-cultural communication, says: "As the COVID-19 pandemic poses unprecedented challenges to theater performances, many artists and theaters are focusing on digital media platforms. Uploading dance works has helped Ma Jiaolong gain more audiences and inspired him to dance further."