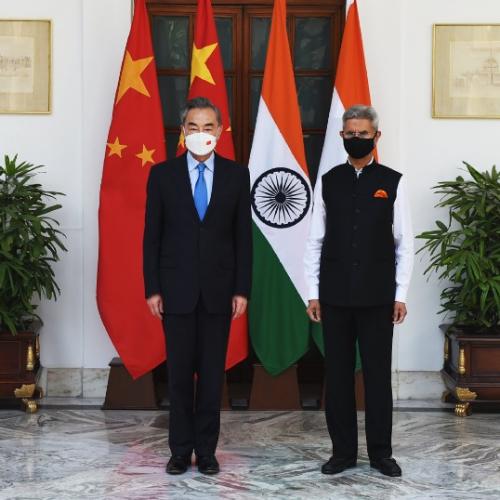 State Councilor and Foreign Minister Wang Yi and Indian External Affairs Minister Subrahmanyam Jaishankar agreed on Friday that restoring peace and tranquillity in the China-India border area conforms to the common interests of both countries.

They also stressed, in talks held in New Delhi, the need to realize regular management of the border dispute on the basis of complete military disengagement in the border area and take effective measures to prevent misunderstanding and miscalculation between the two sides.

Wang arrived in the Indian capital on Thursday for a work visit following recent years' setbacks in China-India relations due to their border dispute. The military standoff along their border area in eastern Ladakh in June 2020 has profoundly disturbed their political and economic ties. Military commanders from the two countries have held 15 rounds of talks to resolve the border dispute, most recently on March 11.

During the talks, they agreed that China and India, which have the same or similar positions on major international and regional issues, should understand and support each other to provide more positive energy to the volatile world.

While exchanging views on the Ukraine crisis, Afghan issue, COVID-19 response and other multilateral issues, they agreed that multilateralism should be upheld and that the United Nations Charter and international law should be honored. They called for peacefully resolving disputes through dialogue and expressed serious concerns about the impact unilateral sanctions have on the world economy and on the security of supply chains.

They also agreed to intensify economic and trade cooperation and facilitate people-to-people exchanges.

Wang said during the talks that China and India should not allow the border dispute to define their relationship or to affect the overall development of bilateral ties.

Jaishankar said that India attaches great importance to relations with China and that its strategic judgment about China's significance remains unchanged. He added that India stands ready to boost communication with China and enhance mutual trust in order to resolve difficulties in the bilateral ties and to sustain pragmatic cooperation between the two countries.