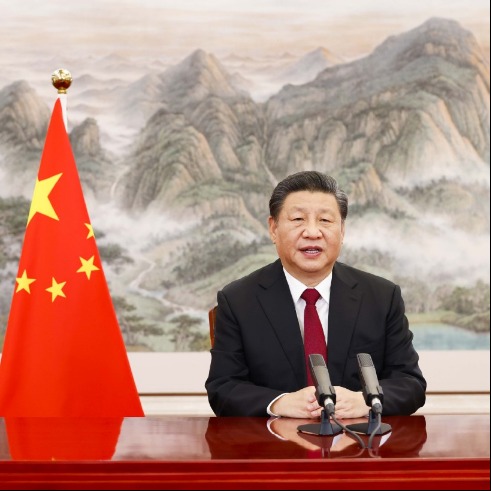 President Xi Jinping has urged the major developed countries to adopt responsible economic policies amid a gloomy global economy, and warned them not to "slam on the brakes or take a U-turn" in their monetary policies, in order to contribute to global economic and financial stability.

Xi made the remarks on Monday in a special address to the 2022 World Economic Forum via video link from Beijing. He was invited by Klaus Schwab, founder and executive chairman of the WEF, to participate in the all-virtual Davos forum.

He underlined the need to cope with risks to promote steady recovery of the world economy, saying that the risks of disrupted global industrial and supply chains, rising commodity prices and tight energy supplies compound to heighten the uncertainty about economic recovery.

Noting that the trend of economic globalization will not be stopped, he urged countries around the world to uphold true multilateralism, insist on removing barriers instead of erecting walls, and choose openness over seclusion and synergy over decoupling, in order to advance the building of an open world economy.

Xi called for reforming the global governance system based on the principle of fairness and justice, and safeguarding the multilateral trading system with the World Trade Organization at the core.

While calling for international solidarity and cooperation to jointly defeat COVID-19, he emphasized the need to ensure equitable distribution of vaccines and close the global immunization gap.

He called for discarding a Cold War mentality and seeking peaceful coexistence and win-win cooperation.

"History has proved time and again that confrontation does not solve problems; it only invites catastrophic consequences. Protectionism and unilateralism can protect no one; they ultimately hurt the interests of others as well as one's own. Even worse are the practices of hegemony and bullying, which run counter to the tide of history," he said.

"We should choose dialogue over confrontation, inclusiveness over exclusion, and stand against all forms of unilateralism, protectionism, hegemony or power politics."

"We have every confidence in the future of China's economy," he added.

Xi reiterated that China remains committed to reform and opening-up, saying it will "deliver national treatment for foreign businesses and promote high-quality Belt and Road cooperation".

He also emphasized that the country will keep working toward its carbon peak and carbon neutrality goals to honor its commitment to the international community and to meet the demand of its high-quality development.

With the Beijing 2022 Winter Olympic and Paralympic Games set to open next month, Xi said China will present streamlined, safe and splendid Games to the world.