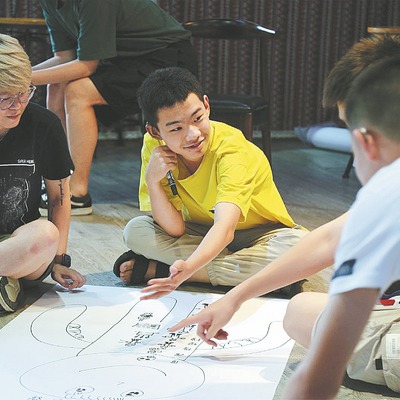 When Peng Linqian was 7 years old, she had a fever that caused her to lose her hearing. She recalls that after waking up that day, she realized that her world had gone completely quiet.

The hearing impairment impeded her ability to express herself, which, for a long period during her childhood, led her to fall into depression and self-isolation.

Learning from personal experience the importance of self-expression, she has been working to give a voice to the hearing-impaired via artistic means, hosting picture book courses and an art festival for children with hearing difficulties.

Earlier this year, when Chen Luhang, often known as Dodo, contacted her about launching a series of writing and performing workshops for children and teenagers with hearing difficulties, she gladly joined the project as a co-organizer.

The first installment of the workshop, named Snail Post Office, was hosted in Chongqing from Aug 21 to 28, and was joined by five participants aged between 8 and 16 years old, accompanied by eight tutors and assistants.

"The workshop aims to empower them to write their own stories. They are constantly encouraged to express how they feel," Peng says.

A theatrical producer working mostly on children's productions, Dodo had been involved in a variety of inclusive arts projects, including the 2018 Unlimited Festival in London and the Second Luminous Festival in East China's Xiamen city, Fujian province, in 2020.

"By working on the Luminous Festival, I got to know a lot of people with hearing difficulties, as well as those who are contributing to serve the group, such as sign-language interpreters," she says.

"I thought about what I could do, and thought that the first step is for the general public to get to know their lives and to hear their stories. What seemed to me as an immediately effective way to do this was writing, so I initiated the Snail Post Office project, to help the children write down their stories."

She then got hold of Chen Si'an, a playwright and theater director with a similar interest in inclusive arts, who served as a tutor on the project.

In her previous theater practice, Chen Si'an had been consciously working to promote equal access, including providing subtitles and audio descriptions in online screenings of stage plays, and hiring sign-language interpreters when hosting events.

"The more I engaged, the more I wanted to contribute, not only to provide accessibility to people with challenges, but also to create together with them," she says at the recent Third UK-China Disability Arts Forum, where a short documentary of the project was screened.

Therefore, when Dodo invited her to join the workshop, she accepted the invitation and made preparations right away, including designing her curriculum based on the participants, and researching the experience of similar workshops from home and abroad.

For each day, they designed a series of writing, storytelling and theater activities that aimed to fully engage the children in exercising their imagination, finding their own voices, enriching the details in their stories and, in the end, enacting the stories with both sign and body language.

However, the actual execution experienced all sorts of obstacles. The team initially wanted to recruit around 15 participants, but only five children and teenagers joined. Even among those, some only attended under the persuasion of their parents.

On the first day of the workshop, the team soon discovered that it was difficult, if not entirely impossible, to meet their everyday targets. Even with the help of sign-language interpreters, the children were either too reserved, or too unwilling, to take part in the activities. One of the girls spent the entire day practicing origami.

"At first we were at a loss when faced with their lack of response, and got nervous that we might have done or said something to hurt their feelings. But after a couple of days, we realized that we aimed too high. They are essentially teenagers, with their own interests and hobbies," Dodo says.

On the third day, the team revised their schedule and took the children on a day trip to a creative complex, with the task of finding a shop they like and observing the people and objects in it.

The group ended up having a pleasant day together, even the girl who preferred origami left a message in the postcard shop she chose, in which she wrote: "Today, I had a wonderful time."

That was the watershed, and after that day, the children began to open up to the tutors.

"I realized that my plans and goals were based mostly on my own expectations, and somewhat result-oriented, so I completely abandoned those things and decided that, for the rest of the workshop, I would simply be there for them, listen to their voices and stories, lead them to exercise their bodies and memories, and get some joyful and earnest communication," Chen Si'an says.

"What they needed the most was not theater education, not even better ways of self-expression, but actually to be seen as equals, to be given full respect and patience, as well as psychological support and encouragement."

Under the suggestion of Peng, they also designed a few activities that may seem initially unsettling for the students, for example taking off their hearing aids or shouting at the top of their lungs.

When the workshop ended, although the team was unable to gather enough stories or materials written by the participants as they had hoped, they ended up establishing friendship with the children.

Dodo says that, in their recent return visit, the general feedback from parents was one of gratitude. A father said that his son, who was introverted at the beginning of the workshop, is making a lot of improvements at school, and even successfully applied for a position at a student society.

The team is now discussing hosting the workshops in other cities, such as Beijing and Shanghai, and plans to write about the stories of these children and share the stories in the form of a stage play.

"We are really not here to teach the children anything. We are doing this to communicate and make friends with them. Hopefully, we have left the children with a few friends too," Dodo says.