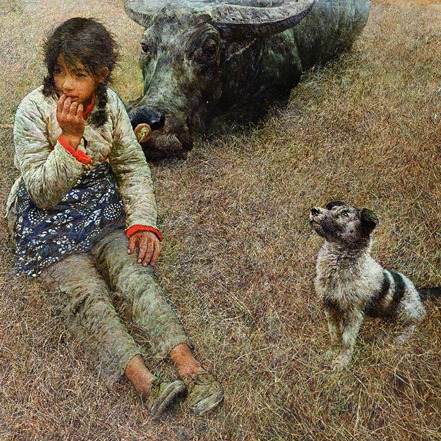 A century of exhibits

Appreciating artwork, including those pieces in the collections of museums and galleries, through smartphones and other devices, is common, especially when cultural venues are under temporary shutdown and travel is restricted due to the COVID-19 pandemic.

The National Art Museum of China recently launched a long-term virtual exhibition on the BOE iGallery app, titled 100 Classical Works of Fine Arts in a Century, which shows viewers high-resolution images of 100 paintings, prints, sculptures and photos, primarily from the museum's collection that reflect the history of the Communist Party of China and the progress of the country since the early 20th century.

Featured works include those reviewing the rise of the CPC to answer a call from the grassroots to fight oppression and invasion. Among the exhibits is July 7, 1937, a painting made by the late oil artist Tang Yihe, in 1940, which depicts a group of college students during a march to call for people to stand up against the approaching Japanese invaders. The work on canvas is named after the date of the Marco Polo Bridge Incident that took place during the War of Resistance Against Japanese Aggression (1931-45).

There is an image of the bust of Li Dazhao, a founder and pioneer of the CPC, produced by Qian Shaowu who rendered the work the majestic feeling of a stone rising above the ground, symbolizing Li's status as "a cornerstone of the Chinese revolution", Qian once said.

Some works document marked projects in the socialist construction after the founding of the People's Republic of China in 1949, such as En Route to Urumqi. Noted artist Ai Zhongxin made the 4-meter-long oil painting in 1954, depicting the construction scene of a section of the Lanzhou-Xinjiang Railway, against a landscape of blue sky, snow-capped mountains and grasslands.

Other pieces present major developments in recent decades, such as Tu Youyou, which is a painting that shows the chemist and Nobel Prize winner and her team working in a lab. Ma Lei, one of the painters, says she and Zhang Caiyi sought to present "a serene, ceremonial atmosphere" in this work to indicate "the long, industrious process of scientific research".

The exhibition marks the centennial of the CPC this year. The works were also on show at Pictures of Times, Journeys to Greatness, an earlier exhibition hosted by the National Art Museum.

BOE iGallery is a digital platform for art that has been developed by the Chinese internet-of-things company Boe Technology Group. Its collaboration with the museum is aimed at enriching people's experience with art by utilizing new technology and diversifying the forms of displaying art.

Works from the National Art Museum's collection will also be shown on BOE iGallery display screens, to be installed at schools, theaters, libraries, hospitals and cultural venues across the country.

"A digital screen can be a virtual art museum of the CPC history," says Wu Weishan, director of the National Art Museum. "Classical artwork should not only be preserved at museums, galleries, libraries and memorial halls, but also integrated into people's day-today lives."

The museum has assembled a collection of over 110,000 objects since its official opening in 1963. In June, it opened its own virtual space on the BOE iGallery app, where hundreds of works from its collection are shown, including many iconic pieces such as the Tajik Bride by Jin Shangyi and Father by Luo Zhongli, which, according to the museum, have been viewed by around 11 million people.