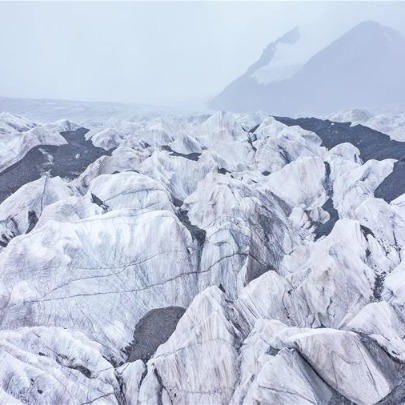 Scientists have called for better measurement and monitoring of retreating glaciers that are melting more rapidly due to a warming climate, warning the phenomenon threatens to cause disasters and create water shortages.

Glaciers around the world have been shrinking more quickly since 1985, said the latest China Blue Book on Climate Change, published recently by the China Meteorological Administration.

China, among the countries with the most glaciers, has not been immune from ice loss. In 2015, China had about 51,800 square kilometers of glaciers, according to the Second Chinese Glacier Inventory carried out by the Ministry of Science and Technology, while the first inventory showed the coverage was 59,425 sq km between the 1960s and 1980s.

The blue book said that in the Xinjiang Uygur autonomous region last year, Glacier No 1 at the headwaters of the Urumqi River in the Tianshan Mountains retreated 7.8 meters at its eastern end and 6.7 meters at its western end.

"In general, glaciers melt but also accumulate water through vapor blown from the sea to create ice, which can usually strike a balance between input and output amounts," said Wu Guangjian, a researcher from the Institute of Tibetan Plateau Research at the Chinese Academy of Sciences.

"However, this balance has been broken by global warming. Glacier melting accelerated and accumulation can't make up for the loss."

Last year, the global temperature was 1.2 C higher than the average between 1850 and 1900, ranking among the three hottest years in historical meteorological records, the book said.

Wu said unstable glaciers can cause disasters including ice avalanches. An ice avalanche blocked the Yarlung Zangbo River in the Tibet autonomous region in 2018, threatening the safety of nearby residents, he said.

On the other hand, melting glaciers could create wetter atmospheric conditions and better environments for plants and animals in the short term, the China Meteorological Administration said.

He Yubang, director of the Qinghai Lake Management Bureau, said, "Ninety-five bird species now nest in the area, an increase from a low of 69, which shows that the lake's environment has improved."

He said that since he began working at the lake 18 years ago, it had risen considerably.

"My nose would be full of sand after a short dinner outside in the yard beside the lake," He said.

"Now it's still clean, even after I return from three day's leave."

However, the lake's water level won't go on rising forever.

Glacier runoff around the world is projected to peak before 2050 and then decline, according to a paper published in the journal Nature Climate Change three years ago.

Wu, the researcher, said: "The decrease in glacier runoff will cut off major water resources in Northwest China, especially in the Tianshan Mountains, as melting water from glaciers provides much of the water used for agriculture and drinking. Although there have been many warming periods throughout human history, the current climate change is so fast that it is outpacing human adaptability.

Through measurement of glaciers, including their speed, annual loss and annual accumulation, and meteorological data from the surrounding area, scientists could simulate the mechanisms of glacial disasters and issue early warnings to local governments, Wu said.

Scientists recently devised methods to slow the melting of glaciers. In a trial project last year, researchers from the Chinese Academy of Sciences' State Key Laboratory of Cryospheric Science placed "quilts" made of insulating reflective materials on 500 sq meters of the Dagu glacier in Sichuan province's Aba Tibet and Qiang autonomous prefecture.

From August to October last year, the parts of the glacier under the quilt melted more slowly than those in nearby areas, reducing their ice loss by about 70 percent.