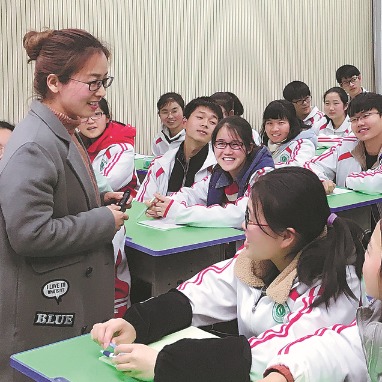 Authorities are providing help and removing the stigma attached to such issues. Zou Shuo reports.

"Let's make a promise: Don't kill yourself this week, and we will continue the counseling session next week," Sun told one of the students who came to her for help.

The 17-year-old student self-harmed every week－usually by cutting her arms, which were covered with scars－said Sun, who teaches at Xishui County No 1 High School in Hubei's Huanggang city.

"She told me that it did not hurt much when she cut herself, and it helped relieve the pain caused by real life," she added.

Sun said it took four sessions for her to pass the "trust test" the student gave her, but after that, the girl started to open up.

"Once she let her guard down, I was totally shocked. I didn't know that a girl of such a young age could suffer so much trauma and hardship from her family," Sun said, adding that she could not elaborate on the trauma as the girl has not yet fully recovered.

"She could not seek help from her academic teachers, classmates or parents. I am her last hope to stop her ending her life at such a young age," she said.

Sun has been a high school psychology teacher for nine years, and she said that both the number of students with serious mental health issues and the severity of their conditions have risen in recent years.

To support their families, many parents in rural areas migrate to cities to find jobs. They leave their children to live with elderly grandparents, who often lack the skills or energy to care for them properly, she said.

The students are also under immense academic pressure to perform well in the gaokao.

The all-important national college entrance exam can change a child's fate as it can lead to enrollment at a top-tier university and possibly a high-paying job. Also, many children can easily develop mental health issues if they fail to achieve good scores in the mock exams, she said.

Sun recalled how another student with a self-harm habit came to see her in the first grade of high school.

After a few sessions, she could tell that the boy needed more professional help, so she told his parents about his situation, and they took him to a hospital. The boy was diagnosed with depression, so he was given medication to take and started seeing a professional therapist.

However, during the second year, the boy suddenly cut himself deeply during class, leaving blood spilling all over his clothes. He came to Sun the next day and showed her the bandages. "He told me that he had cut himself because his parents were frustrated with him. They had asked him why he could not be like other children and had to cause so much trouble for the family," Sun said.

What made the boy special was his strong desire to improve his mental state. However, depression has a way of pulling a person back down, and all it takes is one small incident, she said.

For teenage students with mental health issues, self-harming is a way of gaining attention and calling for help, she noted, adding that tragedies are not unusual as young students with severe mental health problems often resort to extreme behavior or even take their own lives.

A 16-year-old high school student in Chengdu, Sichuan province, who jumped off a school building and killed himself earlier this year had often expressed suicidal thoughts, according to Xinhua News Agency.

Although he had been assessed as being in a "good psychological condition" during routine health screenings, his recent internet chat history with friends, obtained by police, showed signs of low self-esteem, Xinhua said in May.

Moreover, a note found in the boy's pocket read, "Recently, I've been crying about three times a week." In chat messages with a friend, he said that he thought of jumping off school buildings every day as he felt that would solve his problems.

Moreover, the notice stipulated that schools should keep mental health records for all students and also pay special attention to those who might require help.

In addition, the Ministry of Education now requires universities to offer a compulsory course on psychological health to all students, who will earn two credits for completing 32 to 36 hours in class.

A notice issued by the ministry in July said every higher education institution should employ at least two qualified full-time psychology teachers, while primary and secondary schools should employ one related staff member.

Psychological evaluation should be offered annually to primary school students in higher grades, plus middle and high school students and freshmen in universities, the ministry added.

"The students are really interested in the courses, and they are more willing to book counseling sessions at the school's psychological center because they realize that mental issues are normal and nothing to be ashamed of," Sun said.

Fang Wen, a psychology teacher in Menghai county, Yunnan province, said her high school offers mental health courses to first grade students. It also has a psychological counseling center and an interest club related to the topic of mental health, she said.

She has witnessed a major shift in the students' perception of mental health counseling, because those who were afraid to seek help due to the stigma attached to such illnesses are now more willing to open up about their mental problems, Fang said.

The aim of psychology teachers and on-campus counseling centers is to let students know that there are people and a place at school that will understand their problems and offer support, she said.

Fang said her school is the only one in the county that has full-time psychology teachers, but as it only has two, it is difficult to attend to the needs of all the students.

As the education system is still tilted toward academic achievement, relevant authorities and school administrators only pay attention to psychological health education when tragedies occur, while they often ignore the problem again when tragedies become distant memories, she added.

Sun said many psychology teachers have transferred to other jobs because opportunities for promotion are rare in their field.

"We often feel marginalized as there are not many of us at the school, and we may be called upon to perform administrative duties," she said.

Even at universities and schools equipped with on-campus psychology centers, the resources allocated are insufficient, and often the centers lack the authority to make a real difference, he said.

Because off-campus psychological counseling is expensive and scarce, it is imperative that students can seek help at school, Wang said.

He added that mental health should be prevention oriented, and there should be more training to help academic teachers identify students with mental health problems so they can be offered timely help.