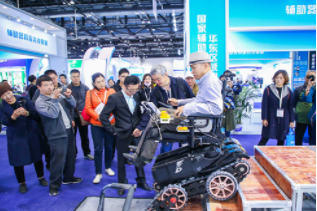 The latest expo on assistive and accessible devices for the elderly and the disabled showcases the fast progress made by homegrown products in recent years, an official said.

The Care and Rehabilitation Expo China 2021, the 14th of its kind since 2007, distinguishes itself by that fact that not one foreign exhibitor has been invited due to coronavirus infections overseas, said Kong Deming, Party secretary of the China Assistive Devices and Technology Center for Persons with Disabilities, one of the expo's organizers.

The virus-induced limitations had first worried Kong because foreign exhibitors traditionally dominate the medium- and high-end products on display and their absence would chip away at the expo's brilliance, he said in an interview on the sideline of the expo.

"But I was pleased to see this year's list of domestic-only exhibitors," Kong said, adding that homegrown products have made huge progress in terms of intelligence, automation, digitalization and informatization.

The three-day event, which began on Friday, is underway at China National Convention Center in Beijing and assistive devices and rehab equipment from more than 200 companies are on display across an exhibition area of 25,000 sq m.

Products include hand gloves that translate sign language into written characters, wheelchairs that can climb stairs and cars that allow drivers with leg disabilities to step on the gas or brake with hands.

The China Disabled Persons' Federation, another organizer, said in a media release that the event aims to showcase the developments in the field in the 13th Five-Year Plan (2016-20) period in an "all-round way".

A number of forums, seminars and other events will be held during the interval on topics such as improving rehab services, accelerating development of accessible devices and bolstering the accessible environment, the federation said.

The federation figures showed that 80 percent of disabled people in China had access to such devices by end of last year, and authorities has aimed to bring the percentage to 85 percent by 2025.

Around 1.11 million impoverished disabled people were given such devices between 2016 and last year as part of the sweeping anti-poverty drive.