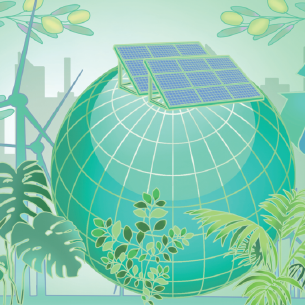 China steps up to the plate

The world has reached a critical moment in history. As we recover from the COVID-19 pandemic, we have an opportunity to create a safer and more prosperous world by pursuing a new model of sustainable, inclusive and resilient economic development and growth.

This new form of growth offers the chance to make the global economy cleaner and more efficient based on strong investments and innovation. It will allow us to effectively tackle the global threats of climate change, biodiversity loss and environmental degradation.

We will be able to create new jobs and new markets for products and services as we develop and deploy the technologies of the future. Critically we will be able to transform our energy systems away from wasteful and polluting forms of generation and consumption that are based on fossil fuels.

Instead we can power our economies with alternatives that do not damage lives and livelihoods through climate change and air pollution.

The World Health Organization estimates that more than 7 million people die each year worldwide from local air pollution, mostly due to the burning of biomass and fossil fuels. Many rapidly growing cities of developing and emerging market countries are suffering severe social and economic harm because workers and their families become sick or die from breathing dirty air.

In August, the Intergovernmental Panel on Climate Change published its latest assessment of the science of climate change, and concluded that rising levels of carbon dioxide and other greenhouse gases in the atmosphere are now affecting every part of the world, particularly by making many extreme weather events more frequent and intense.

This summer we have witnessed heatwaves, flooding and wildfires across the world that have been made more severe by a rise in global temperature of just 1 C. The lives and livelihoods of millions of people are being damaged and destroyed. No country is too rich to be affected, but we also know that the poorest people are least able to protect themselves from these impacts.

In November, countries will gather in Glasgow, Scotland, at the COP 26 United Nations climate change summit to try to accelerate efforts to tackle climate change. The United Kingdom has set the goal of keeping within reach the goal of limiting the rise in temperature by the end of this century to no more than 1.5 C. As the IPCC has pointed out, beyond this level of warming there are dangerously rising risks of potentially catastrophic impacts, such as destabilization of the polar ice sheets and profound disruption of both river flows from the Himalayas and of the monsoon season.

To have a reasonable chance of limiting warming to a rise of 1.5 C, global emissions of carbon dioxide, the main greenhouse gas, will need to be eliminated by the middle of this century. Many countries have now committed to a target of net zero emissions where the amount of greenhouse gases added to the atmosphere each year is reduced to the same level as the amount removed annually through planting more trees and vegetation or technologies such as direct air capture.

The success of COP 26 is not guaranteed. The developed countries have not yet honored their commitment to mobilize $100 billion annually from public and private sources to support climate action by the developing countries. The developed countries must demonstrate that they have kept their promise ahead of COP 26 and should lay out plans to increase financial support in subsequent years. They could, for instance, commit to providing $60 billion from bilateral sources and $90 billion from multilateral sources each year by 2025.

But the new pledges for emissions cuts by 2030 that have been submitted ahead of COP 26 are collectively too weak and only consistent with a pathway to a potentially catastrophic warming of 2.7 C by the end of the century, according to the United Nations.

China is already showing global leadership on climate change. President Xi Jinping made a truly historic announcement in September 2020 at the UN that China will achieve carbon neutrality before 2060. Similarly, it was extremely significant that President Xi declared at the UN General Assembly recently that China will end all financial support for new coal power plants overseas.

China can also show other countries how a large economy can be transformed by moving away from fossil fuels. Although it remains heavily dependent on coal for its energy, it is rapidly developing alternative sources of energy, such as renewables, and investing strongly in forms of transport such as electric vehicles that rely on clean power. As it makes that transformation, China will also benefit in the medium term from a diversification of energy sources, which will make market crises less likely.

President Xi has also indicated that China will control the development of its domestic coal power, and will strictly regulate projects that result in both high energy consumption and high carbon emissions. The new set of instructions for dual controls on energy intensity and total energy consumption, which were announced last month, will encourage the deployment of more renewables. As the costs of new technologies fall and the leading group on carbon peaking and carbon neutrality increases coordinated action across government, the transition to sustainable growth should accelerate.

If China is able to bring forward the peaking of its carbon dioxide emissions from 2030 by accelerating the transition to a strong, sustainable and resilient economy during the 14th Five-Year Plan period (2021-25), it will help to make the whole world a more prosperous and peaceful place.

Nicholas Stern is I.G. Patel professor of Economics and Government and chair of the Grantham Research Institute on Climate Change and the Environment at the London School of Economics and Political Science. Zou Ji is chief executive and president of the Energy Foundation China and special advisor to the China Council for International Cooperation on Environment and Development. The authors contributed this article to China Watch, a think tank powered by China Daily. The views do not necessarily reflect those of China Daily.