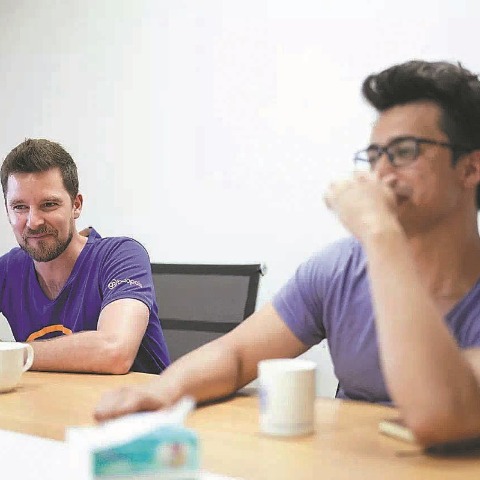 Young foreigners make most of opportunities in China

Country has become a melting pot of many nationalities, allowing companies to make use of global talent

Jay Thornhill was just starting out on the career ladder when he arrived in Shanghai 14 years ago, not knowing anyone in China and having no idea what to expect.

"I was just intrigued to experience life in another culture, and I felt China was a new land of opportunity," he recalled.

Thornhill, from the United States, started off as an English teacher before moving into corporate training and eventually forming his own training consultancy.

In 2015, he and two partners, aware of the opportunities from China's e-commerce boom and the difficulties foreign expats faced in China while shopping online due to language barriers, decided to create a platform that would act as a middleman between fellow foreigners and e-commerce websites.

Their Baopals platform went on to become a resounding success, with over 5 million items sold for a gross merchandise value of 320 million yuan ($49.5 million) in the following years, and 100,000 registered users.

"China is a place where you can pull together resources, move quickly, and scale up," he said. "When you combine a huge, well-educated and hardworking population with the ability to manufacture and build just about anything that exists in the world, you get a very productive business environment."

Thornhill is just one of a sizable number of young foreigners who have used China's dramatic economic growth over the past decades as a springboard for starting their own businesses or launching glistening careers.

"We have observed an increasing number of young people from other nations eager to come to China to explore opportunities," said Miao Lu, founder of the Global Young Leaders Dialogue and secretary-general of the Center for China and Globalization think tank. "Many, after having studied in China, have chosen to stay here to start their own businesses or find jobs."

Meanwhile, the nation has become increasingly welcoming to young foreigners, with President Xi Jinping having twice interacted with those in China recently.

In a reply letter to foreign participants in the Global Young Leaders Dialogue in August, Xi extended a welcome to more young people from other countries to come to China, calling upon youth from home and abroad to increase their understanding, build friendships and secure common progress in the process of mutual learning.

Xi also wrote back to 52 Pakistani students attending the University of Science and Technology Beijing in May last year, saying that the nation will welcome more outstanding youth from other countries to study in China.

Meanwhile, China has also been a top destination for international students, with Chinese universities offering chances to over 400,000 students to further their studies each year.

Peking University, where international students comprise 8 percent of those enrolled, has set a target of increasing the enrollment of foreign students to 10 percent by 2025.

Miao said many students have chosen to stay in the country after completing their studies because they realize the rich opportunities it offers.

"The interest has been particularly strong for youth from countries involved in the Belt and Road Initiative, who are eager to learn more about China and to explore opportunities arising from the country's growth," she said.

Jonathan Lopez, a Latin America strategist at internet technology company ByteDance, said the opportunity he was offered to come to China to study at Tsinghua University was a life-changing moment, despite the challenges of not speaking Mandarin and living in a different culture.

After completing his studies, Lopez, who holds Canadian and Colombian citizenship, described his decision to work in China as a bet that eventually paid off.

However, he only made up his mind after witnessing the abundance of job opportunities China had to offer.

"I was able to see things that I never saw anywhere around the world, like mobile payments, e-commerce and the speed with which China moves," he said. "And that's something that you never see in any other place around the world to that scale."

Lopez highlighted the importance of China continuing to provide opportunities for young people from around the world to come to study in the country.

"In that way, they would also explore this place, learn the language and create a career in China so they can build better bridges between their countries and China and the rest of the world," he said.

Brett Lyndall Singh, a South African doctor with a master's degree in pediatrics and the founder and CEO of AOM Group, a company that seeks to combat childhood malnutrition in sub-Saharan Africa, said the offer he was given to pursue a degree in pediatrics at Wenzhou Medical University in 2011 was a life-changer.

"The cost of education here was more than affordable, and the academic environment was also competitive," he said.

Over the years, he has integrated into local life and developed a strong attachment to Wenzhou, a city in Zhejiang province, doing his clinical electives at a children's hospital there. He even became a key opinion leader online with over 800,000 fans, featuring regularly on an online talk show.

He was also able to meet a group of friends from Africa, with whom he started his company in a bid to transform life sciences on that continent.

Many young foreign business leaders have said that China's enabling environment was another factor that prompted their decision to launch startups in the country.

Gaston Chee, the co-founder and CEO of BeGo, an education firm preparing Chinese students for study abroad, said the nation has always been welcoming to foreign investors, and his company was ready for business immediately after it was set up in Beijing in 2012.

"China has one of the most well-developed investment infrastructures today," he said. "It has created a very welcoming investment environment, a very stable and robust economy, and is perhaps one of the safest countries in the world."

Meanwhile, Chee, from Malaysia, said China has become a melting pot of many nationalities, attracting global talent, and his company had made full use of that.

"We were able to employ diverse nationalities of full-time and part-time staff in Beijing and the United Kingdom who are bilingual and multicultural from virtually every continent in the world," he said.

Thornhill, from Baopals, said one aspect of China's enabling environment is the fact that "the Chinese people tend to be very welcoming and accommodating toward expats".

"They're tolerant of language and cultural barriers, and usually approach these differences with curiosity rather than judgment," he said. "China can also be a very comfortable and convenient place to live, with modern infrastructure, cheap and reliable transportation options, and arguably the best applications in the world for communication, shopping, payments, and more."

Costas Georgiou and Petros Djakouris, co-founders of BeHive, a nonprofit group that organizes workshops and lectures for international students looking for work in China, said they were both greatly impressed with how welcoming and friendly everyone was upon their arrival in China.

Both postgraduate students from Cyprus at the University of International Business and Economics in Beijing, they said they decided to take an intensive Mandarin course at the university to pursue better employment opportunities in China.

A key motivation for them to launch the platform was to extend career support to international students in the country.

"We decided to create an organization that would bring people facing similar problems together and organize interactive, transferable career skills workshops that would empower us to achieve our professional goals," they said in a joint response to questions.

"We love how supportive and accommodating people and local authorities are to international entrepreneurs. Starting a company in China as a foreigner can be a very straightforward process if you have the right contacts."

China has remained a highly sought-after destination for foreign investment, with the inflow of foreign direct investment reaching 758 billion yuan in the first eight months of this year, up by 22.3 percent year-on-year, and significantly higher than the pre-pandemic level of 604 billion yuan in the corresponding period in 2019.

Many young business leaders have expressed optimism about their growth prospects, despite disruptions caused by the COVID-19 pandemic.

Thornhill's company has experienced phenomenal growth over the years.

"We went from a team of three inexperienced young people planning for a startup in an apartment to a team of over 30 people running an e-commerce platform with hundreds of millions of products, he said.

He said the company has been able to see sales grow without much growth in headcount because of improvements in operational efficiency, and it has expanded services outside the Chinese mainland.

"The United States is the big market, but we should be shipping products to many countries before the end of this year," he said.

Chee, from Bego, said he has seen the seedlings of a host of opportunities in China, even as international travel restrictions reduced the number of potential clients for the company.

"I've been very excited at the dawning of the new decade as China emerges from the pandemic and once again exhibits exemplary leadership," he said.

"To the astute and to those who are willing to focus on their craft and appreciate and respect the national plans, it is an exciting time to be an investor in China. We are living in and witnessing an ongoing China miracle, and we cannot afford to miss out."