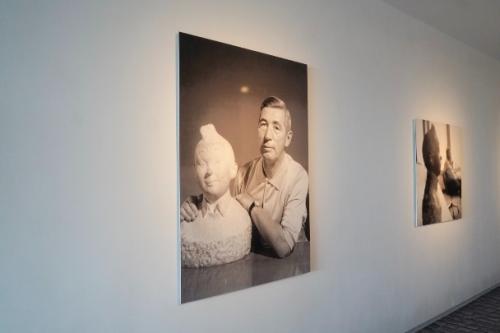 By He Qi | chinadaily.com.cn

Jointly organized by Power Station of Art and the Hergé Museum in Belgium, this exhibition not only showcases the art of Tintin, the protagonist of The Adventures of Tintin, but also sheds light on his creator Hergé, the pen name of Belgian cartoonist Georges Remi.

It reveals the different facets of Hergé's work through his original drawings, the paintings he surrounded himself with, and photographs.

Meanwhile, his interviews, writings, and testimonials that explain his choices, doubts, curiosity to life, and traces of his career as a true artist are also displayed.

As a highlight of this exhibition in Shanghai, the friendship crossing over oceans and lands that was hidden behind Tintin's fourth album The Blue Lotus will be unveiled, which tells the friendship between Hergé and famous Shanghai-born sculptor Zhang Chongren.

Zhang was introduced to Hergé when he was studying at the Académie Royale des Beaux-Arts in Brussels in 1934 and helped the cartoonist create The Blue Lotus and allowed tens of thousands of European readers to know a real China.

The sculpture of Hergé, which was made by Zhang Chongren, is also on display in the exhibition.

The exhibition will last until the end of October.