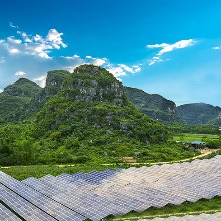 As China has been supporting the development of the hydrogen energy industry, which is one of the important technological paths to achieve the country's carbon emissions peak and carbon neutrality, an increasing number of companies are making plans in the sector.

According to Zhu Gongshan, founder and president of GCL Group, the company's plan is composed of two units - "blue" hydrogen and "green" hydrogen.

For the first phase, GCL New Energy will produce 2.3 million tons of ammonia annually, which can supply 700,000 tons of "blue" hydrogen for the domestic market.

In terms of the "green" hydrogen unit, the company plans to build 100 comprehensive energy stations by 2025 with an annual production capacity of 400,000 tons.

The "blue" hydrogen is produced by transforming methane into hydrogen plus carbon dioxide, while the "green" hydrogen – also referred to as "clean hydrogen" – is produced by using clean energy from surplus renewable energy sources, such as solar or wind power.

"There is a huge market demand for hydrogen energy in China," Zhu said. "GCL New Energy will build itself into a comprehensive hydrogen service provider without subsidies."

Hydrogen is an energy carrier that can be used to store, move and deliver energy produced from other sources, making it powerful and efficient. It can be used in industries including steel, refining, power generation and transportation.

The Chinese government has been working on making plans for the hydrogen industry and accelerating the development of related technologies.