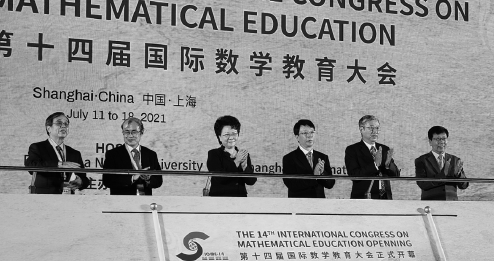 China will enhance the quality of math teachers both in urban and rural areas, make study fun, and strengthen academic exchanges with the world for the development and progress of science, technology and civilizations, according to Weng Tiehui, vice-minister of education.

Learning math will deepen children's knowledge of basic science and help them explore possible relationships among abstractions, which will improve brain power for lifelong benefits, said Weng at the opening ceremony of the 14th International Congress on Mathematical Education held at East China Normal University in Shanghai on Monday.

"To inspire students' interest in math, we should make math classes fun, while avoiding repetitive, excessive training," she suggests.

"Mathematics is the common scientific language of the world, and mathematics education is a cause that requires the dedication of global practitioners. In addition, skilled teachers are at the heart of excellent math education," she adds.

Weng took Shanghai as an example. According to Weng, local teachers there have been engaging in teaching groups and research activities for personal professional development. Over 20,000 math teachers in primary and secondary schools from Shanghai and the United Kingdom have taken part in a China-UK math teacher program, jointly launched by both countries in 2014 to observe classes and share experiences. In 2018, a teacher education center was established in Shanghai, supported by UNESCO, aimed at fostering international teacher training exchanges.

"We're aware that the country still faces the challenge of inadequacy and inequality of education resources, and we will be dedicated to improving children's access to quality education in remote areas," says Weng, adding that a national training mechanism has been established to train around 618,000 math teachers in rural areas.

Weng expects that "experts participating in the congress will offer advice on the training of teachers in China and accelerate long-term global cooperation for the progress of science, technology and civilization".

Shanghai Party Secretary Li Qiang points out the crucial role of mathematics in driving the city's scientific and economic development.

"For instance, the development of artificial intelligence is mainly data-driven, which is inseparable from the work of mathematicians," Li says.

"The city will provide more solid support for the application of mathematical sciences and the development of related industries, especially integrated circuits, AI and biomedicine, for the city's digital transformation and a better life through innovation led by mathematics," he adds.

Cedric Villani, director of Institut Henri Poincare in France and 2010 recipient of the Fields Medal, the highest scientific award for mathematicians, stresses the role of mathematics as "an art as old as civilization" in his keynote speech.

"Mathematicians have always had a privileged role in society, as problem solvers, guardians of an art, deeply attached to values of intellectual freedom and the challenging of opinion," Villani says.

He also accentuates the most important characteristics of a mathematician－persistence, imagination and rigor－which would facilitate a successful career in the subject. 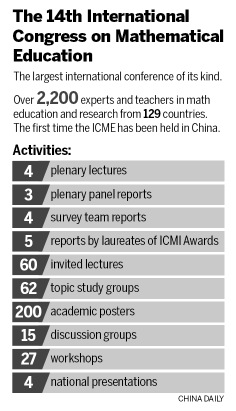 As the largest international conference on math education, the event, organized by the International Commission on Mathematical Instruction, will run through Sunday.

Over 2,200 experts and teachers in mathematics from 129 countries including the United States, France and Canada, will be present at the meeting or will join online, sharing insights on research and development in the field.

This is the first time the ICME has been held in China. Activities, such as plenary lectures and workshops, are available to participants, covering topics including challenges of math teaching amid the COVID-19 pandemic, math education for children under 7, and math textbooks for primary and secondary schools in China.

The opening ceremony also saw the awarding of three prizes recognizing outstanding achievement in mathematics education research and practice. Deborah Ball, professor of education at the University of Michigan in the US, and Tommy Dreyfus, professor Emeritus of Mathematics Education at Tel Aviv University, Israel, were the 2017 and 2019 laureates of the Felix Klein Award, respectively, for their lifetime achievements in math education.

The Hans Freudenthal Awards for 2017 and 2019 were respectively given to Terezinha Nunes, professor of educational studies at the University of Oxford in the United Kingdom, and Gert Schubring, a long-time member of the Institut fur Didaktik der Mathematik at Bielefeld University in Germany, for their innovative and highly influential programs of mathematical research.

The National Council of Teachers of Mathematics, based in the US, won the Emma Castelnuovo Award in 2020, in recognition of its achievements in supporting teachers in ensuring quality mathematics learning for students.

The Chinese Mathematical Society has the pleasure of hosting the 14th International Congress on Mathematical Education in 2021 in China. The congress, held under the auspices of the International Commission on Mathematical Instruction, takes place at the East China Normal University in Shanghai, which has been both a powerful engine for China's economic and social development and the cradle of modern Chinese mathematics and mathematics education. It offers a perfect environment for a challenging congress. We invite participants from all over the world to come to Shanghai and make ICME-14 a rich experience for all.