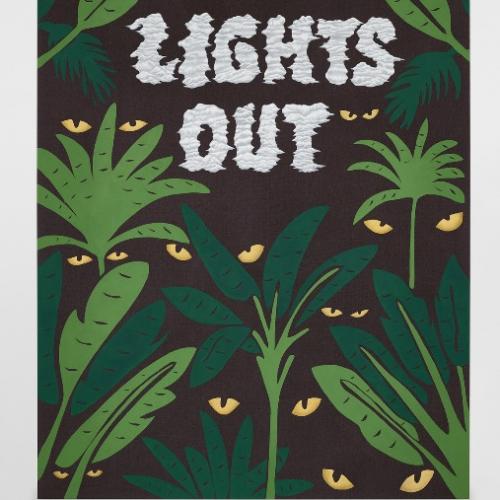 In a letter to his friend Darren Bader, Joel Mesler says his one-man show in Hong Kong displays his childhood memories of the nights when his parents would go out, as well as the images and scenes he dreamed about.

Titled Joel Mesler: In the Beginning, the exhibition shows new paintings by the artist who now lives in East Hampton, New York, in which the bold, highly stylized patterns and a tropical touch remind one of the works of Paul Gauguin. Held at Lévy Gorvy's Hong Kong space until Aug 14, the exhibition is Mesler's first show in Asia.

The works feature a variety of elements from Mesler's childhood experiences which would later pop up in his dreamscapes, and all together they would swirl around in his mind as he produced these canvases.

Mesler said when he would fall asleep, "the animals in my wallpaper would meet with the furs of my mother's jackets, the colors of their clothes and the smells of their perfume and cologne".

Mesler renders big, short texts to the composition of his works, which are drawn from his parents' parting words to him, before leaving home for the evening, and his thoughts about what his parents were doing as the night went on.

"I knew they did things, but I didn't really have the language yet to describe them. And what about when they came home? If it was morning and the birds were chirping, did they feel bad they were out so late?"