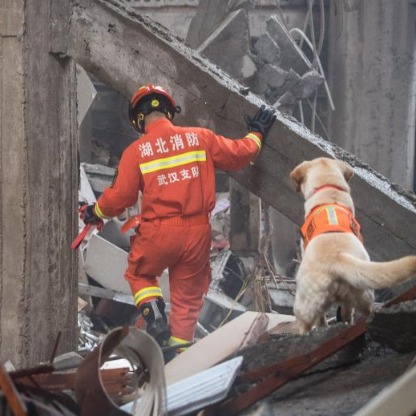 President Xi Jinping has ordered all-out efforts to rescue the injured after a gas explosion in Central China's Hubei province on Sunday morning.

Xi, also general secretary of the Communist Party of China Central Committee and chairman of the Central Military Commission, asked authorities to console the families of the casualties and investigate the accident in a timely manner.

The blast happened at around 6:30 am at a two-story building in Zhangwan district of Shiyan city. The first floor of the building is a market and some people live on the second floor.

By 14:30, rescuers pulled out 150 people from the debris, 12 of them dead and 138 injured, including 37 critically hurt. All the injured are receiving treatment at hospital.

The cause of the accident is under probe.

Images and video footage circulating on social media platform Weibo show houses that were flattened with debris scattered around due in the vicinity.

When the explosion happened, some stores in the market were already open and several people were buying groceries, a witness said.

A woman owner of a store which is less than 100 meters from the explosion told Beijing Youth Daily that people usually sell breakfast shortly after 6 am in the two-story building.

Another witness said he was on his way to the building to have breakfast when he heard the explosion more than 200 meters away. He saw bricks and glass flying out from the building and the ground was shaking.

A fourth person said his home was more than 100 meters away from the explosion and luckily his home escaped the damage.

An injured person said he felt like a wave hit him in the back and hurled him forward for three meters, injuring his head and hands.

A nearby store owner said residents and store owners in the surrounding areas have been moved to a temporary settlement converted from a stadium.

Shiyan city has set up a rescue command center at the scene.

173 local firefighters have been sent to the scene, along with 38 vehicles and six sniffer dogs.

The local armed police in Shiyan have sent 40 members to help in the rescue operation.

Wang Zhonglin, deputy Party chief and governor of the province, has arrived at Shiyan.

The Ministry of Emergency Management has sent a team to Shiyan to guide rescue efforts.