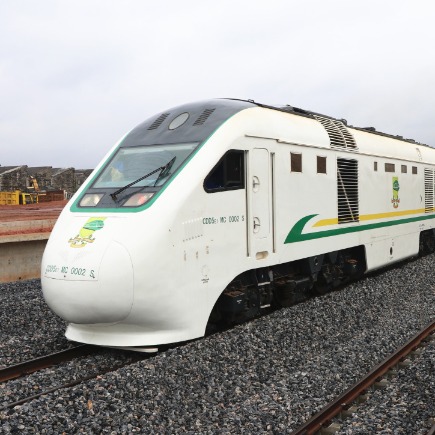 The Lagos-Ibadan railway in Nigeria, the first modern standard gauge double track railway in West Africa and the longest on the continent, opened for service on June 10.

Meeting modern railway standards, it has a designed speed of 150 kilometers per hour.

A major part of Nigeria's national trunk railway network planning and the connectivity among Economic Community of West African States rail network, the railway is expected to improve traffic conditions in southern Nigeria and provide a convenient and comfortable way to travel for local residents.

As the railway has a station at Apapa Quays, the largest port in the country, it will play a role in boosting development of the port and promote export-oriented economic development in the region.

At the launch ceremony, Nigerian President Muhammadu Buhari pointed out that railways can create economic opportunities and wealth, improve industrial development and activate an economy. The government has highly valued railway infrastructure construction.

He added that the country will build a national railway network to promote economic and social development.

Lagos State Governor Babajide Sanwo-Olu said that as Lagos is home to Nigeria's biggest air and sea port, transit between Lagos, Ogun and Ibadan is the most crucial commercial corridor in the country, adding that it will radically transform life and work along the corridor and open opportunities for investment, real estate and urban and commercial development.

A major Sino-African cooperation project, the railway is also a flagship cooperative project between China and Nigeria.

Its operation is expected to enhance Belt and Road construction in West Africa and rev up social and economic development of Nigeria, as well as deepen cultural and people-to-people exchanges within the region as a whole.

Cui Jianchun, Chinese ambassador to Nigeria, said that 2021 is the 50th anniversary of the establishment of diplomatic relations between China and Nigeria and that the ceremony confirmed the correct decisions of China and Nigeria in the past and will open a better future for both countries.

Construction of the project started in March 2017. Throughout its length CCECC fulfilled its social responsibility by recruiting more than 10,000 local workers and offering them business management and professional skill training.

The company also helped build public facilities and organized education activities while respecting local customs and traditions and safeguarding local employees' legitimate rights and interests, which established a harmonious relationship between the Chinese side and local people.