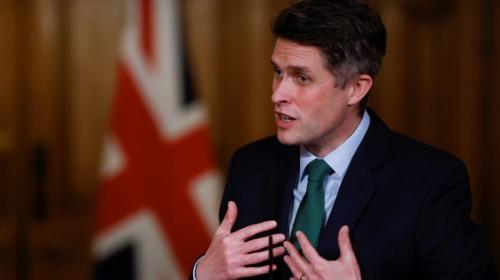 The United Kingdom's only exam board supplying school history textbooks on the Israel-Palestine conflict has withdrawn them amid claims of bias in their content, and following a warning from the British government that teaching on the subject must be balanced.

Last month, headteachers in the UK were told by the Education Secretary Gavin Williamson to ensure "political impartiality" over the conflict. It follows 11 days of violence last month between Israel and Palestine, which saw more than 250 people killed and homes, schools, hospitals and other critical infrastructure damaged.

Williamson said focus on the conflict had increased in many schools, which in some cases had led to the expression of anti-Semitic views.

Pearson, the publishing and education company that owns the Edexcel exam board, has now withdrawn two textbooks after being accused of favoring the case for Israel, The Guardian reported on Tuesday.

Two years ago, the books were removed when Jewish organizations claimed the books favored Palestine, and Pearson undertook to make revisions suggested by the Board of Deputies of British Jews and UK Lawyers for Israel.

A spokesperson for Pearson said it has again "paused" distribution of the books. "We will gather a wider range of views and we will take action if there is more work to do to get that balance right," they said, quoted by The Guardian.

In 2019, Pearson commissioned an external organization to examine the accuracy of the books. The consequent report by Parallel Histories suggested some changes in terminology but found "no overall bias".

Now, the British Committee for the Universities of Palestine, known as Bricup, has complained about the revised editions.

Bricup has produced a report that lists the changes in the textbooks that it says favor the Israeli point of view.

"The reviews have consistently underestimated and explained Jewish and Israeli violence, while amplifying and leaving Arab and Palestinian violence unexplained," said the report.

"They have expanded or left intact accounts of the suffering of Jews and Israelis, while minimizing and editing the accounts of Arab and Palestinian suffering."

Jonathan Turner, chief executive of UK Lawyers for Israel, was quoted by The Guardian as saying the new version is less biased. He said: "The authors of the Bricup report … are biased against Israel and promote a boycott of all Israeli universities."

Historians are concerned that too few schools now teach about the conflict. The Guardian reported that just 1,100 students in 27 schools in the UK have chosen it for this year, out of an age group cohort of 600,000.

Former history teacher Michael Davies, founder of Parallel Histories, a charity focused on the teaching of modern conflicts, told The Guardian: "Teachers don't want to teach it and not because it's not interesting, but because they are scared about being accused of bias. The other exam boards had already departed the scene and so Pearson, although getting pilloried over changes to the books, are the good guys here."