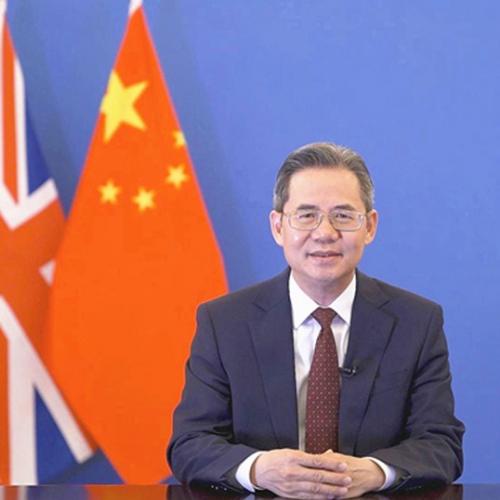 Closer exchanges and cooperation between China and the United Kingdom will serve the interests of both sides, and contribute to world peace, stability and prosperity, Zheng Zeguang, China's new ambassador to the United Kingdom, said on Monday.

Zheng was appointed ambassador after his predecessor, Liu Xiaoming, concluded his term earlier this year.

China and the UK are important trading partners for each other, despite the impact of COVID-19, Zheng said in a video speech that marked the start of his tenure as ambassador. The close exchanges in culture, education and other fields have deepened the friendship between the peoples of the two countries and fostered public support for bilateral relations, he said in an address to British citizens and Chinese citizens living in the UK.

Recalling his experience as a student at Cardiff University in Wales on a government program 35 years ago, Zheng said: "Back then, there were only several hundred Chinese students here. Today, the figure has exceeded 200,000. This is yet more proof of the keen interest of the two peoples for closer exchanges and cooperation."

In the video speech, Zheng also highlighted the two telephone conversations between the top leaders of the two countries last year, which "charted the course for further advancing our bilateral relations". It is essential that the two sides follow through on the important common understandings between the leaders, and respect each other's core interests and major concerns.

The 57-year-old, who was born in Guangdong province, had been vice-minister of foreign affairs since 2015.

He started his diplomatic career in 1986, when he joined the Foreign Ministry, and he has abundant experience in working overseas.

Zheng has largely concentrated on United States-related issues since 1990, when he started working in the Foreign Ministry's Department of North American and Oceanian Affairs and in China's embassy in the US.

He became assistant minister of foreign affairs in 2013 before being promoted to the post of vice-minister. He also served as vice-mayor of Nanjing, the capital of Jiangsu province, between 2010 and 2013.

Before heading for London to take up his new role, Zheng met Caroline Wilson, the British ambassador to China.

On June 2, Wilson wrote on her social media account: "Zheng Zeguang and I agreed on our shared responsibility to promote constructive, productive UK-China relations. Our discussions covered transnational challenges, people-to-people links, trade and areas of disagreement."

Zheng said in a message issued on the website of the Chinese embassy on Monday that China stands ready to work with the UK to "enhance exchanges, expand cooperation and handle differences in an appropriate manner under the principles of mutual respect, equality, inclusiveness and mutual learning".

In this way, Zheng said, the sound and steady development of China-UK relations will deliver more benefits to the peoples of the two countries and beyond.

In his message, he also talked about China's economic achievements since the founding of the People's Republic of China in 1949. "China has achieved the miracles of rapid economic growth and sustained social stability rarely seen in the world," he said, noting that, during the past 40-plus years, 770 million rural Chinese people had been lifted out of poverty.

Sino-UK relations have faced serious challenges recently in the wake of some British politicians politicizing and blocking economic and investment activities by some Chinese enterprises. Some politicians in the UK have also made unfounded accusations about China, including incorrect allegations about the situation in the Xinjiang Uygur autonomous region.

However, economic relations between China and the UK have continued to deepen. Statistics show that from 2010 to last year, the value of China-UK trade in goods surged from $50.1 billion to $92.4 billion, and China replaced Germany as the UK's biggest single import market during the first quarter of this year.