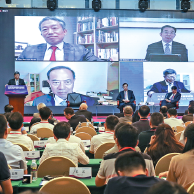 RCEP to accelerate the recovery of global economy

By LIU ZHIHUA and MA ZHIPING in Haikou | CHINA DAILY

With its ratification steadily advancing, the Regional Comprehensive Economic Partnership agreement is likely to come into force next year, shoring up regional development and injecting strong growth impetus into the global economy, experts and industry insiders said.

Signed by China, Japan, the Republic of Korea, Australia, New Zealand and the 10 members of the Association of Southeast Asian Nations in November 2020, the agreement has created the world's largest free trade bloc. It will enter into force 60 days after being ratified by six of the ASEAN members and three non-ASEAN countries.

Thailand, Singapore, China and Japan have already ratified the RCEP. And the Ministry of Commerce has said that all the signatory states have expressed their intention to ratify the deal within the year so that it can come into force on Jan 1,2022.

Zhang Jianping, director-general of the Beijing-based China Center for Regional Economic Cooperation, said closer ties among the RCEP signatory countries will have a far-reaching impact on regional trade, investment, and market integration. This will help the recovery of the global economy, which is smarting from the impact of the COVID-19 pandemic and facing rising trade protectionism.

The RCEP is designed to cut tariffs by as much as 90 percent on goods traded between the signatory states in the 20 years since coming into effect. In the common rule of origin established by the RCEP, only 40 percent of regional content is required for goods to be considered of RCEP origin, much lower than the thresholds of other free trade agreements.

The agreement promises to extensively boost the regional economy, by facilitating trade and investment, accelerating the flow factors of production, furthering the integration and coordination of industrial and supply chains, and promoting the development of new industries and businesses including cross-border e-commerce.

According to Da Hongfei, CEO of Onchain, a blockchain tech start-up, the RCEP promises a huge and thriving market for innovation-oriented companies, such as fintech start-ups, thanks to intensified regional cooperation. He also said the RCEP agreement shows its signatory economies have confidence in and firmly support globalization at a time when globalization faces many challenges.

The forum was jointly organized by the Publicity Department of the Communist Party of China Hainan Provincial Committee, China Daily, Hainan-based China Institute for Reform and Development, and the China Institute for Free Trade Ports with Chinese Characteristics.

The report also said the RCEP could boost global GDP growth by $186 billion a year. And Credit insurer Euler Hermes predicted that the common rule of origin could increase intra-regional trade by $90 billion annually, and the RCEP's less restrictive rules, compared with other FTAs, imply fewer impediments for trade in the region.

The common rule of origin will also attract manufacturers seeking to optimize the comparative advantages of individual markets, according to Jia Jingwei, vice-chairman of Swiss Re Corporate Solutions' China branch.

The RCEP will drive the growth of regional investment in the medium to long term, Jia said, adding that he expects higher demand for cargo, transport and credit insurance.

According to Deutsche Bank's Kenny Khoo, who recently moved from Shanghai to Singapore to set up the bank's China-ASEAN desk, Chinese corporations are paying more attention to ASEAN since the signing of the RCEP.

Tu Xinquan, dean of the China Institute for WTO Studies at the University of International Business and Economics in Beijing, said the RCEP economies, despite having different levels of development and resource endowment, have strong economic and trade complementarity, and deeper economic and trade cooperation among them means better utilization of resources and higher levels of efficiency in production. The RCEP also provides a valuable opportunity for lower-income economies to further integrate into the global industrial and trade and investment networks, he said.

"For the world economy, the RCEP promises not only more exporters of quality goods and services, but also expanding markets with increasingly deep-pocketed consumers," Tu said.

As the RECP region, the world's manufacturing powerhouse, also promotes innovation, it will unleash the innovation potential of the Asia-Pacific and therefore create more business opportunities for both regional and non-regional businesses, greatly contributing to global economic recovery, Tu added.

George Yong-Boon Yeo, Singapore's former minister for Trade and Industry and Foreign Affairs, and senior adviser to Kuok Group and Kerry Logistics Network, said at the forum that the RCEP must never turn inwards. An inclusive RCEP will encourage others to liberalize too, and oppose the ill wind of decoupling and trade war, he said.