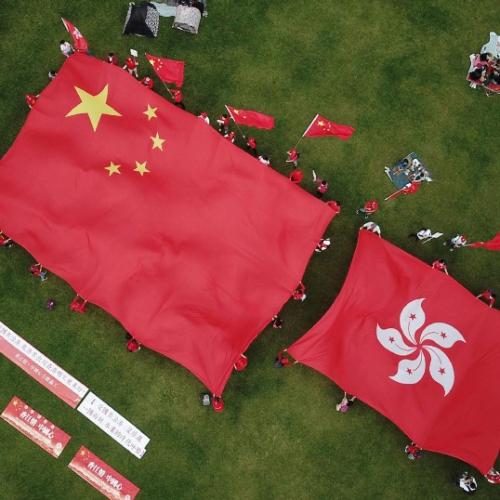 A draft decision by China's top legislature about improving the electoral system in the Hong Kong Special Administrative Region conforms to the "one country, two systems" principle, while ensuring "patriots govern Hong Kong," a senior Chinese diplomat said on Tuesday.

Yang Xiaoguang, minister at China's embassy in the United Kingdom, made the remarks during a virtual news conference on Hong Kong affairs.

Underscoring the imperative and urgency of improving the electoral system in the SAR, Yang said the existing electoral system and the mechanisms of the SAR have "obvious loopholes and deficiencies, which were explored by anti-China, destabilizing forces to seize the power of the governance of the HKSAR".

"In recent years, especially after the turbulence over the proposed amendment bill in 2019, anti-China, destabilizing forces and radical localists in Hong Kong have openly clamored for 'Hong Kong independence'," he said. "They used the electoral platforms of the SAR and the deliberation platforms of the legislative council and the district councils, or their position as public servants, to blatantly carry out anti-China and destabilizing activities to paralyze the functioning of the legislative council and obstruct the law-based governance of the HKSAR government."

Yang said some foreign and external forces had interfered in China's Hong Kong affairs, and openly provided support for those anti-China groups in the SAR, which jeopardized constitutional order and the rule of law in the SAR, damaged China's national security, and disrupted the social order of Hong Kong.

"China must take necessary steps to improve the electoral system and remove existing institutional risks, to ensure the governance of Hong Kong by Hong Kong people, with patriots as the main body, safeguard law-based and effective governance in HK, and keep the implementation of 'one country, two systems' on the right track, as they are solid foundations for sustained stability and prosperity in HK," he said. "We will develop a democratic electoral system that suits HK's conditions and reflects the overall interests of the society. We will ensure the extensive and balanced political participation of HK compatriots in accordance with the law."

Some foreign governments have argued that the move will undermine the "one country, two systems" principle, as well as Hong Kong's democracy.

But Yang refuted such concerns, saying they are "totally unacceptable, groundless, and unreasonable".

"HK is part of China, and HK affairs are totally China's internal affairs," he said.

He also pointed out that non-interference among nations in each other's internal affairs is an important principle of the United Nations Charter, and a basic norm in international relations.

On March 5, a joint statement from 70 countries was delivered at the 46th session of the United Nations Human Rights Council, reiterating their support for China's "one country, two systems" principle in relation to the HKSAR. More than 20 countries also voiced their support for China's position and for measures on the governance of the HKSAR at the Human Rights Council.

Yang said the endorsements demonstrated "our position is widely understood and supported in the international community".