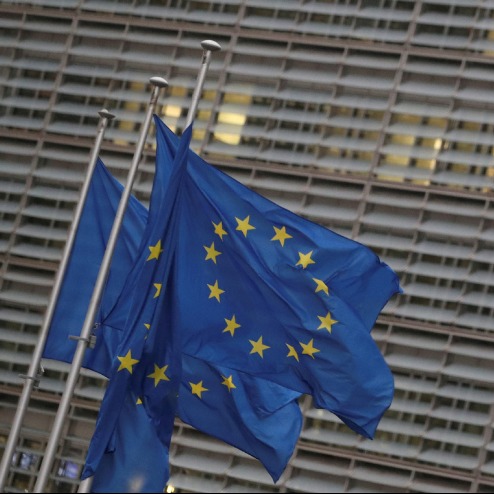 A sloppy economy, high unemployment rate, shrinking investment and trade, and rising fiscal deficit and public debts made 2020 a troublesome year for the European Union. And although the EU economy rebounded in the third quarter, thanks to the EU and member states' governments using various kinds of policy tools, the second wave of COVID-19 infections added to its uncertainty.
The novel coronavirus pandemic has had severe and long-term impacts on the EU economy with the virus infecting more than 37 million people and claiming over 848,000 lives in the European economic zone by Feb 24. It forced EU member states to lock down cities, close borders and limit economic activities, which further worsened the economic situation in the European bloc.

Data suggest a 6.8 percent GDP decline in the eurozone and 6.4 percent in EU-27(the EU as a whole). And given that the European Central Bank has projected real GDP growth of 3.9 percent for eurozone in 2021 based on a baseline scenario, it will not be easy for the EU to reboot the economy. Also, according to data from Eurostat (Statistical Office of the European Communities), the unemployment rate in the EU was 7.5 percent and eurozone 8.3 percent in December 2020.

The pandemic has worsened some of the EU's economic problems. For example, from January to November 2020, the EU's exports and imports fell by 10.3 percent and 12.3 percent year-on-year respectively, with intra-EU trade declining by 8.4 percent.

Another problem the EU faces is the widening gap between Northern and Southern Europe. The pandemic has had a bigger impact on Southern European countries, as evident from projections for 2020－the Spanish, Italian and Greek economies will contract by 11 percent, 9 percent and 10.5 percent respectively. And it remains to be seen how much the €750 billion ($903 billion) EU recovery fund can help to revive these economies－or the EU economy as a whole.

European enterprises' rising default risk is yet another problem for the EU. Eurozone companies' debt increased by more than €400 billion in the first half of 2020, and if they do not continue to receive financial relief, they could go bankrupt. Which is to say that, despite European governments adopting policies to prevent job losses, the unemployment situation could worsen.

Worse, governments in EU countries have been increasing their fiscal deficit levels to boost their economies, since the European Commission has used the escape clauses of the Stability and Growth Pact to allow more relaxed budget rules. As a result, in the third quarter of last year, the government debt to GDP ratio increased to 97.3 percent in the eurozone and 89.8 percent in EU-27.

All this suggests the EU's road to economic recovery will be bumpy. To resume normal economic activities, in order to boost GDP growth, the EU has to first contain the pandemic. But the delayed delivery of vaccine doses and mutating variants of the virus have made that job difficult for the EU.

The timely approval and use of the recovery fund could have helped revive the EU economy, but precious time was lost due to the differences among the EU member states. In fact, the European Commission had to urge the EU countries to approve the fund so it could be distributed in six months and used to boost the economies of the EU countries.

Also, European governments and enterprises will take several years to repay the heavy debts they have incurred, leading to secondary economic and political problems. The EU's problems have been further compounded by the sluggish global economy and the devastating impact of the pandemic on some economies that are major trade partners of the EU－for example, the economy of the United States, the EU's largest trade partner, declined by 3.5 percent in 2020, the steepest since 1946.

Besides, the pandemic-induced GDP decline and the resulting rising unemployment have given rise to socio-political problems in many countries, including in EU states, with Italy witnessing political polarization.
Yet the EU has created new development opportunities. Not only the EU but many other economies too have made joint efforts to boost global economic recovery. For instance, the EU and the United Kingdom reached a trade and cooperation agreement post-Brexit, and the EU and China concluded the negotiations on the Comprehensive Agreement on Investment. Plus, the inauguration of Joe Biden as US president has raised hopes for improvement in EU-US trade.

In addition to fiscal aid, the EU has tried to help its member states transform their development model, by encouraging them to exercise more strategic independence, work out industrial policies and increase investment in the digital economy and the green industry.

Political uncertainties, including political turbulence in Italy and elections in Germany, will continue to influence the course of the EU economy.
Yet Portugal has raised hopes by setting three major priorities for its Council of the European Union presidency in 2021－to promote Europe's recovery leveraged by the climate and digital transitions, to implement the Social Pillar Action Plan for ensuring climate and digital transition, and to strengthen Europe's strategic autonomy keeping it open to the world. Accordingly, the EU should take measures to deepen win-win cooperation within and beyond the union to not only boost the EU economy but also facilitate global economic recovery.

The author is director of the Center for European Studies and Jean Monnet chair at Fudan University. The views don't necessarily represent those of China Daily.

The opinions expressed here are those of the writer and do not necessarily represent the views of China Daily and China Daily website.