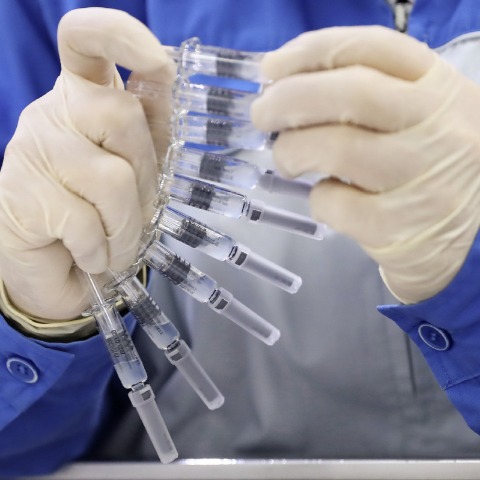 Hong Kong's population will be getting vaccinated soon as the first million doses of COVID-19 vaccine, produced by Sinovac Biotech, arrived in the special administrative region from Beijing on Friday.

Receiving the vaccines at Hong Kong International Airport, Secretary for the Civil Service Patrick Nip Tak-kuen and Secretary for Food and Health Sophia Chan Siu-chee appealed to local residents to get vaccinated early to protect themselves and others.

Qiu Hong, deputy director of the Liaison Office of the Central People's Government in the HKSAR, said the domestically developed coronavirus vaccine fully demonstrates the care and support of the central government for Hong Kong.

Members of five priority groups, who are considered vulnerable or easily exposed to the virus, may make an appointment for the vaccine via an online booking system beginning on Tuesday. Inoculations will start on Friday at five community vaccination centers and the Hospital Authority's 18 general outpatient clinics.

Stanley Chaing Chi-wai, chairman of Lok Ma Chau China-Hong Kong Freight Association, said he would register for the vaccine at the earliest opportunity.

Cross-boundary transport drivers and border control officers are among the five priority groups. Priority will also be accorded to healthcare workers, those aged 60 and over and public service providers such as cleaners and police officers. It is estimated that 2.4 million Hong Kong residents fall into priority categories.

Although the time needed for inoculations may affect the work of some drivers, he said these were "necessary sacrifices" to enable the sector to resume its effective and safe operation.

Chaing also hoped that after workers in the cross-border transport industry are vaccinated, some Chinese mainland cities would relax restrictions on Hong Kong transport workers. Some cities currently do not allow Hong Kong drivers to enter urban areas to load and unload goods.

In a statement on Thursday, the Hong Kong Federation of Education Workers called on the HKSAR government to include teachers in vaccination priority groups so that schools can safely resume in-person classes.

Hong Kong schools have suspended on-site classes three times in the past year in response to COVID-19 outbreaks in the community. After the Lunar New Year holiday, only one-third of total students from each school are allowed to return to campuses, and only on a half-day basis.

Another 1 million doses of the Fosun Pharma/BioNTech vaccine will arrive in Hong Kong by the end of February and will be provided in another 24 community centers.