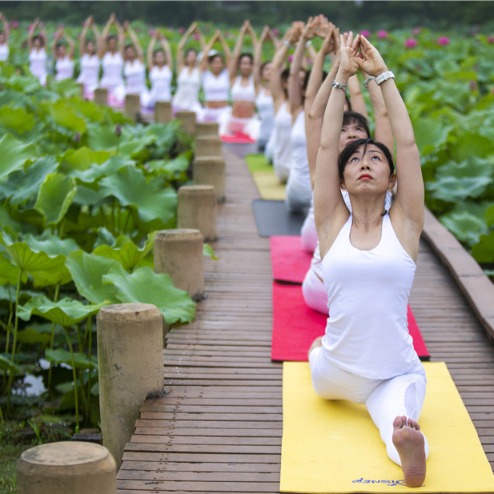 Report offers checkup on health of Chinese people in 2020

Over 60 percent of respondents held a positive attitude toward the prospects of China's healthcare system and the potential for technologies, a health report found.

By conducting an online survey of 56,196 Chinese residents and analyzing data from their platforms, China Daily app and DX Doctor aim to gather a portrait of the overall health of Chinese people in a year plagued by the novel coronavirus.

During the fight against the COVID-19 pandemic, China's healthcare system withstood the big challenge. Several versions of guidelines to prevent and control the spread of the novel coronavirus were issued to the public; the ability to conduct nucleic acid tests has grown to 15 million in one day; online medical counseling was widely used; homegrown vaccines have been approved and administered at home and abroad.

According to the report, the pandemic affected Chinese people's daily lives, from work to commuting and travel, but it also led to positive changes in lifestyle and family relations.

The survey found that physical health remained a top priority in life, with people's health expectations high at 8.8 out of 10.

Most respondents thought personal factors, such as lifestyle, work and economic situation, had the greatest impact on their health situation.

A total of 98 percent of the respondents admitted they were troubled by health issues. Unchanged from last year, the top three issues were emotional problems, poor skin conditions and being unsatisfied with one's body image.

At the same time, people didn't think they had done enough to keep healthy, only awarding themselves 5.5 for their efforts.

Men made more efforts than women to stay fit, and older people tended to be more active than their younger counterparts in living a healthy life.

Based on customer survey data from Decathlon, running and walking were the most common exercises, followed by dancing and ball games.

DX Doctor was founded in 2014 with the aim of bridging the misinformation gap between medical professionals and laymen. It has released its health report for three consecutive years.