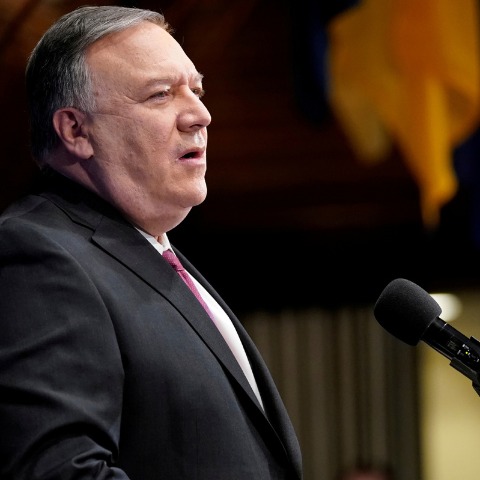 Editor's note: On Thursday China announced sanctions against outgoing US secretary of state Mike Pompeo and 27 other officials in Trump administration for seriously violating China's sovereignty and derailing China-US ties. Five experts share their views with China Daily on this issue. Excerpts follow:

In the waning days of the Trump administration, especially after the general election results had become clear, then US secretary of state Mike Pompeo started to run the US State Department with a personal agenda, under a personal Cold War mindset, without any regard for long-term US foreign policy interests. Via a blizzard of poisonous measures, many targeting China, he essentially engaged in a spree of a kind of geopolitical vandalism that history has never seen before of a State Department under a lame duck presidency.

For example, Pompeo put some officials of the Hong Kong SAR and central government officials stationed there on a sanction list for allegedly "suppressing democracy", which in fact was basically quelling an insurrection at the Hong Kong legislative council in July 2019, but 10 times as violent as the insurrection at the US Capitol on Jan 6 this year.

Censuring these Chinese officials and officers, who fulfilled their duties to defend the constitution in Hong Kong, would be akin to censuring the US politicians and police officers, including a few who made the ultimate sacrifice, in putting up a courageous fight against the storming mob in Washington DC.

The purpose of these measures is clear. By using, more appropriately abusing, the US executive power, it essentially boxed in the incoming administration and constrained it from rectifying its wrongs any time soon. Such sanctions are aimed at pushing the incoming secretary of state to set foot in Pompeo's ludicrous policy direction. But the damage is also clear, as in many cases the damage would be of a long-term nature and permanent in some cases.

The reckoning finally arrived. For a long time, the Trump administration has been talking about reciprocity in the Sino-US relations. The wanton sanctioning of Chinese officials by the Trump administration is now reciprocated. The Chinese Foreign Ministry announced that Mike Pompeo and several other Trump officials mostly involved in foreign policy and national security matters are now barred from entering China, Hong Kong and Macao, and are barred from being involved in China-related business dealings.

The State Department under Mike Pompeo is an aberration in the history of Sino-US relations. Hopefully the final dark chapter will be gone with Pompeo and other politicians like him, as we would hope the Biden administration's State Department under Anthony Blinken would look ahead and move forward, not to be entangled in the terrible mess created by his predecessor.

John Gong, a professor at the University of International Business and Economics

China announced decision to ban 28 former Trump administration officials from traveling to China and its special districts such as Hong Kong and Macao just a few hours before Biden's presidential inauguration.

The ban, consisting of restrictions to travel and conduct businesses related to these places, seems to apply not just to these individual former officials, but also their immediate family members and companies they have connections with. This ban is obviously a response from Chinese government against these former Trump officials' incessant and purposeful destructions of a mutually beneficial US-China relationship. In the past four years, they have not only tampered with China's sovereignty, harmed the Chinese interests, but also harmed the American interests.

Such a retaliatory measure is being widely lauded among Chinese netizens. I think the last-minute sanctions against China by the Trump administration before the transfer of power was the last straw for China.

These 28 former officials, especially the 10 mentioned by name on Chinese Foreign Ministry's website, are known to hold a deep-seated prejudice not just against China' s political system, but also against the Chinese people. They are either hawkish or super-hawkish toward China, and have advocated a containment strategy toward China.

The well-timed message seems to be clear: China wants to end the free fall of Sino-US ties under the Trump administration as Biden starts to undo the Trump legacy.

However, China still maintains respect for a foreign head of state despite the fact that Trump kept calling "China Virus" even in his presidential departure speech and is allegedly responsible for the Capitol Insurrection on January 6, 2021.

This sanction list issued by China is making history just as the Trump administration's mounting damages against China did. The lesson both the Biden administration and Chinese government could learn is to put the best effort in managing the US-China relationship with good will, reason, and wisdom so that another round of such tit-for-tat exchanges are avoided.

The Foreign Ministry's decision to sanction 28 senior officials of Trump administration is far more than symbolic as some people have speculated.

Those officials and their family members have been barred from entering Chinese mainland, Hong Kong and Macao, and companies and institutions they have connections, will face restrictions in doing business with China.

That means, any foreign company conducting business with China should not hire the people on the sanction list, as well as their family members, or those companies may face restrictions in Chinese market. Under this circumstance, most companies and organizations will think twice to have ties with these 28 people, since China is the second-biggest economy in the world.

US enterprises, accounting firms and law firms that have branch offices in Hong Kong and Macao need to weigh the costs if they do not maintain distance from these 28 people.

It's unrealistic to expect the US new administration to take a U-turn on the US' China policy, especially after the Trump administration has clearly labeled China as a strategic rival. But Sino-US ties should and can be characterized with virtuous competition, rather than vicious confrontation.

China's sanction move has demonstrated that the country is resolved to and able to take concrete counter-measures to fight back to safeguard its national interests.

The sanctioned US officials were carefully selected, because they severely deteriorated the Sino-US relationship over the past four years.

The outgoing US secretary of State Mike Pompeo stirred trouble over Taiwan and Xinjiang in an attempt to add points to his political career. Pompeo was busy provoking China even as the countdown on his began ticking. Peter Navarro, Robert O'Brien, John Bolton and Steve Bannon were also key anti-China officials under Trump.

In the past four years, China tried to avoid tit-for-tat confrontations with maximum restraint when those China hawks in the Trump administration took irrational actions against China. China remained concerned about the stability of China-US relations.

The US imposed several rounds of sanctions on China , including recently blacklisting six Chinese officials on Jan 15 and pointing finger at Hong Kong. And the list of 28 US officials came out as a concrete move to fight back. Prohibiting the 28 people and their immediate family members and companies from entering China and restricting companies associated with them from doing business in China is an effective response.

It should be made clear that China did not use the huge Chinese market to force US companies to press the US government to lift sanctions. The US companies actively mediated and lobbied out of concerns that their interests are hurt by the US sanctions against China.

On the contrary, the US government stepped up restrictions on Chinese companies' investment, trade and supply, which developed into an all-round suppression against China's technology industry. For example, profits of US microchip giants Qualcomm and Intel sharply shrank because Chinese companies, their major buyers, are banned.

Biden stress on unity in his inaugural address revealed that he is faced with serious domestic problems and will spend a lot in dealing with domestic issues.

China announced sanctions on Pompeo and other 27 officials is also a signal that China will not compromise on matters of principle and will not easily let go of people who hype prejudice and hatred between China and the US.

China conveyed the sincere willingness several times to have rational negotiations with the US for cooperation based on the win-win principle.

The two sides should have made agreements and joint efforts on bilateral, regional and global governance issues, such as climate change, nuclear nonproliferation and public health, especially on containing the COVID-19 pandemic and seeking economic recovery. The US should stop cutting ties with China because the trade war has not only hurt China but also backfired at itself.

A silver lining in new era

Thanks to the US global supremacy, many United States politicians, such as the 28 on China's just-released sanction list, have been taking it for granted to intervene in China's internal affairs, frequently pointing a finger over matters on Taiwan, Hong Kong, Xinjiang and Tibet .

Yet China's sanctions against 28 outgoing officials and advisors in the Trump administration has sent a clear signal to the US that Beijing shows zero tolerance to any politicians who "gravely interfered in China's internal affairs, undermined China's interests, and offended the Chinese people."

In the future it will be a wishful thinking for those two-faced US politicians if they want to avoid penalties for wantonly damaging China's interests. They can no longer cash in China's market for themselves if they maliciously slander China in office, and perform a U-turn after stepping down, saying what they did was out of duty.

According to Biden's inauguration speech, he will give priorities to issues from pandemic control, economic recovery to climate change. And without cooperation with China, such goals can hardly be achieved.

Unlike his predecessor, Biden is expected to deal with China under one-China principle. A silver lining emerges four years after the clouds over Sino-US ties. Though the US strategy towards China may basically remain the same, Biden administration is more predictable and his policies may be more stable.

Hopefully Biden will correct his processor's wrongs by more engaging with China, which can benefit bilateral ties as well as the rest of the world.

Zhu Songling, a professor at the Institute of Taiwan Studies, Beijing Union University.