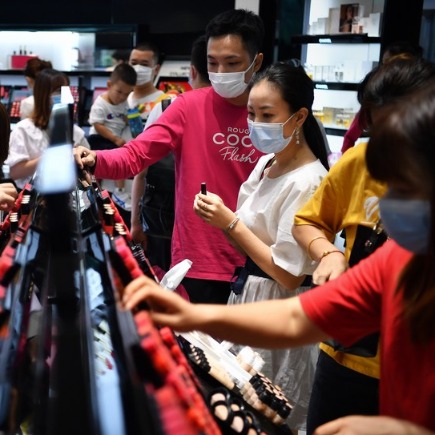 Consumption to play bigger role in 2021

Consumption is expected to become a major driving force for China's economic growth in 2021 with more supportive policies in place, while the country's fiscal spending is likely to focus more heavily on public services to improve livelihoods, particularly in education, health and elderly care, to keep the economy stable and within a proper range, experts said.

A report issued on Sunday by the Academic Center for Chinese Economic Practice and Thinking at Tsinghua University forecast that China's GDP is expected to expand by 2.1 percent year-on-year in 2020, with fourth-quarter growth of 5.5 percent.

It predicted that the economy is likely to grow by 8 to 9 percent in 2021 if the COVID-19 pandemic situation continues to taper off, and by about 5 percent if the pandemic makes a severe comeback during the winter and spring.

"Inadequate demand and weak consumption are the major issues facing China's growth at the moment. Robust policy support shall be put in place to boost effective demand, particularly in consumer activities," Li Daokui, a professor and dean of the Tsinghua think tank, said on Sunday at the release of the report.

In particular, Li said future policy steps shall focus more on people's pursuit of better livelihoods and their demand for smoother, more facilitated migration between urban and rural areas with certain institutional hurdles gradually being phased out. Internet business and the digital economy shall develop with more targeted regulatory approaches.

"Internet business and the digital economy have been a major contributor to China's growth, particularly during the pandemic outbreak, as they have facilitated our lives and boosted consumption," Li said. "Healthy growth of these businesses is also crucial in adding to China's competitive edge in emerging industries."

Well-calibrated regulatory approaches shall be stepped up in pursuit of a more effective oversight for the healthy growth of these businesses, said Wu Xiaoqiu, a senior economist at Renmin University of China.

China will keep its economic fundamentals within a proper range, and the country's proactive fiscal policy will be maintained and introduced in a more effective and sustainable manner, according to the Central Economic Work Conference, which was held from Dec 16 to 18 in Beijing.

Both the deficit-to-GDP ratio and growth of the quota of special local government debt are likely to decline in 2021, yet readjustment and optimization of the fiscal spending structure can be anticipated, according to the report.

Li Keaobo, a senior researcher at the Tsinghua think tank, added that quicker issuance and allocation of next year's special local government bonds can be expected, while the requirement for the profitability of investment using funds released from these bonds will be raised.

This year, China has set its target for the deficit-to-GDP ratio at over 3.6 percent, up from 2.8 percent a year ago, and the local government bond issuance quota at 3.75 trillion yuan ($573.4 million).

Zhang Bin, a senior fellow at the Chinese Academy of Social Sciences' Institute of World Economics and Politics, suggested on Sunday in a separate interview that efforts in building a stronger social safety net for low-income residents, as well as education and healthcare, shall carry more weight in a refined fiscal spending structure to make it more effective and bring greater benefits.

Zhu Ning, deputy dean and professor of finance at the Shanghai Advanced Institute of Finance, summarized fiscal spending in these areas as "new spending on livelihoods", which he believes is crucial for China to achieve high-quality growth in the years to come.

"Such spending closely relates to core areas of livelihood, and will reduce people's worries over medical care and education and shore up their confidence in spending," Zhu said. "On the other hand, these areas have strong and constant demand from the public, and will make our fiscal spending more effective."

As the Central Economic Work Conference pledged to maintain policy support for the economy with no sudden shift in policies, experts believe that some gradual winding down in 2021 of China's easing measures introduced since the start of the COVID-19 situation can be possible.

Zhu said he believes that efforts in tax and fees cuts, particularly for smaller firms, will be continued as part of a proactive and effective fiscal policy.

The National Bureau of Statistics announced on Sunday that in the first 11 months of the year, the profits of major industrial firms expanded 2.4 percent year-on-year to more than 5.74 trillion yuan, up 1.7 percentage points from that in the first 10 months.

"Such growth, though mild, is hard won as demand for bulk commodities remains weak worldwide. Robust growth of major industrial sectors such as petrochemicals and steel requires effectively boosting domestic demand and consumption. Expanding domestic demand will become increasingly important for China's growth with the possible decline in our exports of medical supplies," said Li Keaobo from the Tsinghua think tank.