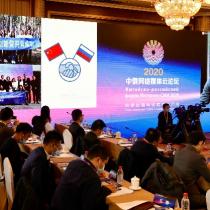 Chinese and Russian media have played important roles amid the coronavirus pandemic, and should boost exchanges and cooperation on innovation, officials and media from both countries said on Friday.

"A new round of technological revolution and industrial innovation has been accelerated globally, while the broadcasting technology is having faster, deeper and broader impacts in the public opinion ecology and people's lives," Niu Yibing, deputy head of the Office of the Central Cyberspace Affairs Commission, said at 2020 China-Russia Online Media Webinar.

Niu suggested media outlets from both countries should keep up with the most advanced and most strategic broadcasting technology, and enhance bilateral media cooperation in the field of technology under the framework of China-Russia Year of Scientific and Technological Innovation.

China and Russia launched the Year of Scientific and Technological Innovation as planned on Aug 26.

Digital media from China and Russia should work together to tell more vivid stories about the fight against the pandemic, jointly fight against attacks and provocations from Western countries, establish a healthy international public opinion environment, and share experiences of prevention, control and treatment of the coronavirus, Niu said.

His remarks and proposals were echoed by speakers from both countries.

"We are witnessing changes in the architecture of international relations, and the integration processes are rapidly taking place during such a significant historical period when media play a special role," said Bella Cherkesova, deputy head of the Ministry of Digital Development, Communications and Mass Media of Russia.

Cherkesova hailed the current media cooperation between the two countries, and the quantity and quality of Chinese content have made a greater impact on Russian audiences through cooperation.

Cherkesova said the media from both countries supported each other during the pandemic.

The product is constantly updated and iterated, the content is wonderful and diverse, and change is the only constant in new media.

"What we can do is to embrace and accept these changes, and act accordingly," Chen said.

"We hope that the Chinese and Russian media can deepen exchanges, learn from each other's strengths, concentrate superior resources, and make our contribution to the realization of better-quality content dissemination and cultural exchanges," Chen said.

But still, the most valuable part of Sino-Russian relations is the friendship during this most difficult time, Perepelitsyn said, recalling that SPB TV had provided 100,000 masks to colleagues at CGTN and Shanghai Media Group in Wuhan in March.

"There is a similar Russian proverb: a friend in need is a friend indeed. I think it could be used to describe the bilateral media cooperation between China and Russia,"Perepelitsyn said.