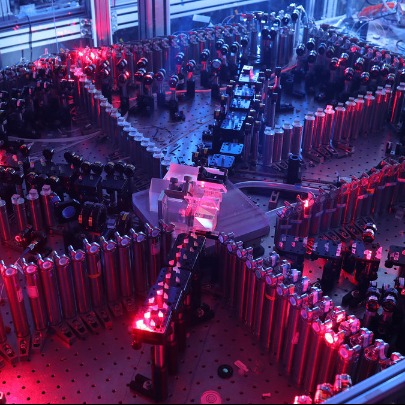 Chinese scientists have created the world's first light-based quantum computer, called Jiuzhang, that can reliably demonstrate "quantum computational advantage", a milestone in which a quantum machine can solve a problem no classical supercomputer can tackle within a reasonable amount of time, according to a study published in the journal Science on Friday.

It is the second time that humanity has reached this milestone, after Google declared its 53-qubit quantum computer had achieved such a breakthrough last year.

However, Jiuzhang used a new method of manipulating 76 photons to do calculations instead of Google's, which uses superconductive materials.

Experts hailed the Chinese machine as a "state-of-the-art experiment" and a "major achievement" in quantum computing, as it proves the feasibility of photonic quantum computation, thus providing a fundamentally different approach to designing such powerful machines.

Quantum computers excel at running simulations that are impossible for conventional computers, leading to breakthroughs in materials science, artificial intelligence and medicine.

Moreover, most components of the light-based quantum machine can operate at room temperature, aside from its sensory equipment, which must be kept at -269.1 C.

This makes it significantly easier to make and maintain than superconducting quantum computers, the bulk of which must be kept at ultra-cold temperatures to ensure the materials can conduct electricity without any resistance.

Fabio Sciarrino, a quantum physicist at Sapienza University of Rome, told Science News, an outlet based in the United States, that his first impression of the Chinese quantum computer was, simply, "wow".

According to interviews by the University of Science and Technology of China in Hefei, Anhui province, whose researchers created Jiuzhang, Barry Sanders, director of the Institute for Quantum Science and Technology at the University of Calgary, Canada, called the feat "one of the most significant results in the field of quantum computing" since Google's claim to quantum advantage last year was later challenged by IBM.

Anton Zeilinger, noted quantum physicist and president of the Austrian Academy of Sciences, said that, following this experiment, he predicts there is a very good chance that quantum computers may be used very broadly someday, according to the university's interviews.

"I'm extremely optimistic in that estimate, but we have so many clever people working on these things, including my colleagues in China. So, I am sure we will see quite rapid development."

Quantum machines' astronomical computing power arises from their basic building blocks, called quantum bits, or qubits, according to the University of Science and Technology of China.

Unlike bits of classical computers that present data as either 0s or 1s, similar to the on and off of a light switch, qubits can harness the strange property of quantum mechanics known as superposition and exist as 0s, 1s or everything in between, like the increments on a control knob.

Quantum machines can take computational shortcuts when simulating extremely complex scenarios, whereas conventional computers have to brute force their way to a solution, taking significantly more time in the process. Moreover, quantum machines' computing power can increase exponentially as more qubits are added.

Therefore, Jiuzhang, which uses 76 photons as qubits, is about 10 billion times faster than the 53-qubit computer developed by Google, according to the university.

"The feat cements China's position in the first echelon of nations in quantum computing," the university said in a news release.

Pan Jianwei, who is recognized as China's top quantum scientist and one of the key researchers behind Jiuzhang, said the calculations they carried out can not only showcase the machine's computing prowess but also demonstrate potential practical applications in machine learning, quantum chemistry and graph theory.

"Quantum computing has already become a fierce competition ground among the United States, Europe and other developed regions," Pan said, adding that China's quantum computational advantage took about seven to 10 years to achieve, since the team first decided to tackle the boson-sampling problem around 2013.

However, Pan stressed that the photonic quantum computer is a highly specialized and unorthodox machine, characterized as an elaborate, interconnected tabletop setup of lasers, mirrors and detectors, and is currently only programed to do boson sampling."It is not a general-purpose quantum computer," he said.

Lu Chaoyang, another key researcher behind Jiuzhang, said that, even if a machine is only good at one job, such as analyzing materials, it can still have great social and economic value if it can overcome an extremely challenging problem.

In the near future, scientists may increase Jiuzhang's possible output states－a key indicator of computing power－by 10 orders of magnitude, from 10 to the 30th power to 10 to the 40th power, Lu said.