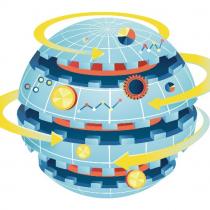 The novel coronavirus pandemic is still raging in many parts of the world, with many countries－including the United States, India and some European countries -experiencing a second or third wave of infections. In a way, this indicates the failure of pandemic prevention and control measures in these countries.

That the US presidential election was held at a time when the pandemic situation was still serious led to a fresh surge in infections and deaths in the country. Another reason for the increase in COVID-19 cases could be the politicization of the pandemic by some US politicians, and the laxity of the administration in taking effective anti-pandemic measures.

As for European countries, they lack policy coordination, and soft lockdowns and other anti-pandemic measures cannot help contain the virus. In the developing world, countries such as India and African states have relatively weak medical systems and limited testing capacities, which make it difficult for them to evaluate the true extent of infections in communities and take effective measures to contain the epidemic.

The increasing number of new cases worldwide indicates that the global situation may not return to normal anytime soon－and human beings may have to learn to live with the novel coronavirus for some time.

Sluggish consumption and declining trade have led to pessimistic market expectations; and accordingly, enterprises' need or urge to increase investment may decline. Which could result in a further decline of production capacity in the future, dragging the global economy.

Overall, rising unemployment has become a major problem for many economies. Also, since people in some countries such as the US have a comparatively low savings rate, an economic decline even in the short term could have a serious impact on the livelihoods of low-and medium-income groups, which could eventually lead to social unrest.

Many small and medium-sized enterprises, which have relatively weak risk-resistance capacity, can hardly survive the impact of the pandemic. And since SMEs are major job creators, their bankruptcy will further increase unemployment, creating a vicious circle.

In the Western world, monetary and fiscal policies implemented to offset the impact of the pandemic have had little effect. Many Western countries have introduced several rounds of large-scale monetary easing policy, reducing interest rates to zero or even negative, but with limited effect.

As the real economy in many countries is still sluggish, large-scale liquidity flows into either the capital market or is used to speculate in the real estate sector, and as a consequence, the overall economic situation remains unchanged. And as many Western countries have a high debt ratio, the effect of fiscal policy on the economy and employment has been quite limited.

It is clear therefore that the impact of the pandemic on the global economy is long-term and more serious than most people think, and unless there's a large-scale supply of effective and safe vaccines worldwide, the pandemic cannot be controlled, and the global economic recovery, instead of being V-shaped, could be L-shaped－a long-term slump like a long, cold winter.

And while domestic problems in some countries, such as a sluggish economy, heavy debt burden, high unemployment rate and widening income gap, could trigger conflicts between the rich and the poor and between different ethnic groups, the global recession could lead to some geopolitical confrontations in some regions, threatening global security and peace, and changing the balance of power among major countries.

Since traditional economic powers such as the US and European countries may be trapped in sluggish growth for quite a while, China may become the leading engine of global growth and the most attractive market for international capital－not least because it has largely controlled the virus and is back on the growth track. Also, it is possible that there will be a triangular economic competition among China, the US and Europe in the near future.

And the shifting of the economic balance from the West to the East, especially to China, could necessitate a change in the global governance pattern, in which China will play a more important role and have a greater say.

The author is a researcher at the China Center for International Economic Exchange.