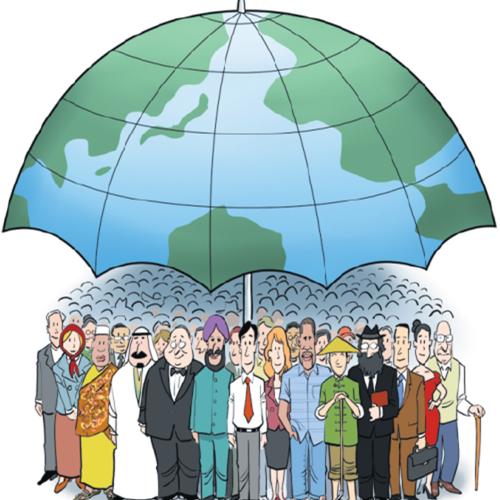 Along with the novel coronavirus pandemic, which is still raging in many parts of the world, the United Nations, on the 75th anniversary of its founding, faces many significant challenges. Even before the pandemic broke out, the UN's global role had been constrained due partly to decreasing budget and increasing workload.

In the post-pandemic world, however, the UN needs to overcome even more complicated challenges.

How the UN plans to overcome these challenges may shape the trajectory of its future as well as that of multilateralism. As for the UN's new mission in the new era, President Xi Jinping, in his speech at the UN summit meeting to commemorate the 75th anniversary of the founding of the world body on Monday, highlighted the ways the UN can address those challenges as well as enhance the role of multilateral institutions.

First, the UN needs to prevent Western countries obsessed with ideological confrontation from disrupting its agenda. This kind of ideological rivalry has gradually evolved into a duel between two political systems, which could lead to the crippling of multilateral organizations including the UN.

As Xi said in his speech, unilateralism and monopoly of discourse in international affairs will not serve the purpose and mission of the UN. We live in a world of cultural, religious, social and political diversities. All countries, in particular non-Western developing countries, have the right to follow political and social policies which best suit their domestic conditions and can help them achieve sustainable economic growth and facilitate sociopolitical development.

Also, the developing countries should have greater say and representation in the UN and other global organizations.

Second, all countries should acknowledge and respect the UN Charter as the bedrock of international relations. History shows that maintaining international peace and security has been less demanding for the UN when all the countries complied with the basic principles and norms of the UN Charter.

The founders of the UN have provided some institutional safeguards for the sovereignty of smaller, poorer and weaker countries by incorporating respect for state sovereignty, non-interference in other countries' internal affairs, and non-use of force against other countries into the basic principles of international relations. But the binding authority of the UN Charter, from time to time, has been ignored even violated by some Western hegemonic powers' frequent use of coercive and military means to realize their own domestic policy goals. Yet, as Xi said, the legal authority of the UN Charter still enjoys strong support among the majority of people around the world even.

And third, it has become more urgent for the UN to give priority to alleviation of extreme poverty and narrowing of income disparity. But unfortunately, a long-term effect of the pandemic could be the reversal of the good work national governments and international institutions, in particular the UN system, have done to promote global development and reduce poverty.

Developing countries are beset with multiple problems including rising unemployment, and people's falling incomes and shrinking economic opportunities. To make matters worse, traditional major industries in developing countries, such as textiles, tourism and handcrafts, face strong headwinds because of shrinking overseas demand due to COVID-19. And the dramatic decrease in the volume of remittances from recession-hit developed countries has further aggravated the economic woes of many a developing country.

These are but some of the problems the world faces, and China will be glad to help the UN to persuade all the countries to work together to not only overcome the problems but also build a fairer, and more equitable secure future.

The author is a research fellow at the Shanghai Institutes for International Studies.