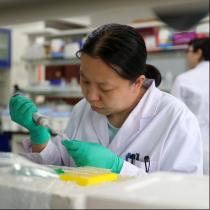 On Friday, President Xi Jinping told scientists at a symposium that China will need to create first-class academic journals and academic platforms, as well as strengthen academic exchanges domestically and abroad. These measures will ensure China has a healthy ecosystem for basic research and a robust system for evaluating scientific works.

Li Jun, vice-president of the China Periodicals Association, said at the 10th China English Scientific and Technological Journal Conference in Beijing on Wednesday that it was the first time Xi highlighted creating first-class academic journals in his speeches, which showcased the significance of this topic for the Party and the State.

Last year, the Ministry of Science and Technology, along with other ministries and academic organizations, issued two documents to encourage and support universities, research institutions and companies to create first-class scientific journals.

According to the Institute of Scientific and Technical Information of China, as of June, China had 371 English natural science journals, 13 more than the year prior. The country only had 40 such journals two decades ago.

The 371 journals covered 102 scientific subjects, with mathematics, biology, physics, information sciences and Earth sciences the top five subjects with the most number of English journals. Beijing was the epicenter of English scientific publishing, hosting 206 journals. Shanghai came in second with 35.

Guo Tiecheng, vice-president of the institute, said China's English scientific publishing saw noticeable improvements over the last two decades, but it is still significantly behind both in terms of the number of journals and their academic influence compared to publishing powerhouses like the United States and the United Kingdom.

"The best way to improve our scientific journals is for Chinese scientists to create new, original breakthroughs in basic research and discover new phenomenon in natural sciences," he said. "Our jobs are to provide good services and platforms so that scientists are willing to publish their work in our journals."

Zhang Tieming, director-general of the Society of China University Journals, said China is one of the world's biggest producers of scientific papers, yet it lacks its own influential international journals that can publish them, so the majority of impactful studies are published in foreign journals. Therefore, there may be issues in communication, copyright and data security, especially in sensitive or cutting-edge fields.

"Having our own international journals will bolster China's voice in science and technology-related issues," he said.

Ning Bi, a business director at Clarivate Analytics, said China may need 1,000 English scientific journals to satisfy its publishing needs, and it is estimated that by the end of 2023 the nation will have added 150 new, high-level journals to its pool.

"We need to motivate key research institutions, State laboratories and universities to participate in publishing English journals," he said.

Shi Lei, journal publishing director at Tsinghua University Press, said the most important key to a successful scientific journal is the staff, which should consist of a capable, dedicated and internationalized editorial board.

"Their academic intuition, perception and influence will play a decisive role in topic selection, manuscript quality and promoting the journal," Shi said.

Some of the top journals from the university, including Friction and Nano Research, are now among the most influential scientific publications in their respective fields thanks to this philosophy, Shi said.

However, as the number of journals and published papers increases, academic misconduct may also rise. Shi said it is imperative to take a "zero-tolerance attitude" toward these violations, strictly adhere to the peer-review protocol and use new technologies to check for various issues such as plagiarism and duplicate submissions.