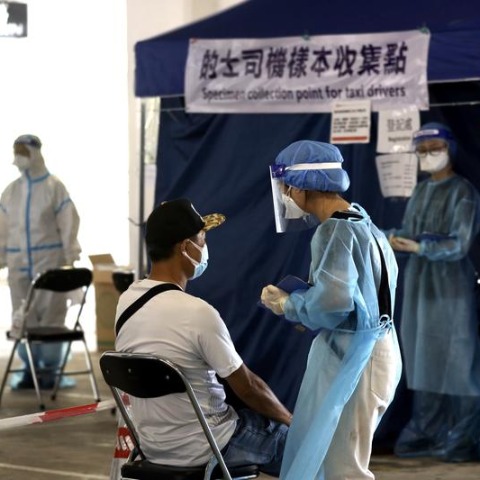 Hong Kong is well prepared for the launch of its COVID-19 universal testing program on Tuesday, said a leading government official, as more than 553,000 people had registered online by 6 pm on Monday.

More than 6,000 medical workers have volunteered to participate in the program, and about 4,000 civil servants from 75 policy bureaus and departments have been assigned to facilitate administrative work, the government of the Hong Kong Special Administrative Region said on Monday.

Inspecting a testing center, Chief Secretary for Administration Matthew Cheung Kin-chung said on Monday the preparations for the weeklong program have been completed.

"The design of the centers has ensured that the testing will be safe, convenient and quick, with full protection of personal privacy," he added.

According to the program's website, appointments at 14 community testing centers are fully booked until Sept 7.

But despite the enthusiastic participation of residents, some medical group leaders and opposition activists have repeatedly smeared the program and called on the public to boycott it. On Saturday, a volunteer who was distributing leaflets about virus testing was attacked by a man with an umbrella.

Lawmaker Alice Mak Mei-kuen said it was "selfish" for some individuals to discredit the universal testing program for personal purposes. Mak warned that if the public was misled by their words and deterred from taking the test, some cases of asymptomatic infection in the community may be missed, leading to repeated outbreaks that would ultimately harm the public.

Chow Pak-chin, vice-president of the Medical Association, told China Daily that he hoped these individuals would not "politicize "public health. "It is vital for professional medical workers to make evidence-based claims," he said.

Fanny Hui Siu-lam, a shop assistant, said the campaign by opposition activists was "utterly irresponsible", as they were putting their political agenda before residents' well-being.

"These so-called medical group leaders are simply opposing for the sake of opposition," Hui said. She recalled that they had also claimed the city's public hospital system was on the brink of collapse due to a labor shortage.

"But when the mainland medical teams come and help us, they suddenly say our healthcare system can handle the pandemic smoothly," Hui said.

On Monday, the city reported nine new COVID-19 infections, the lowest daily rise since Aug 24, taking the total to 4,810. In view of the waning trend, the government announced the phased reopening of Hong Kong's schools from Sept 23.