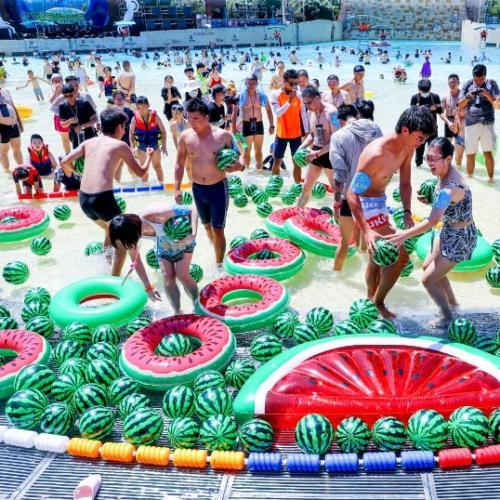 Wuhan permits big gatherings as things get back on track

Around 20,000 people have visited the amusement park every day during the summer vacation, he said, with around 12,000 of them going to the water park.

The park decided to host the music festival because the city has been a low-risk area for COVID-19 for some time and has witnessed a strong recovery from the pandemic, Tang said.

Pictures of partygoers in swimsuits at the park waving to the beat of music have raised eyebrows on international social media platforms, with the hashtag "Wuhan" among the top 10 trending topics on Twitter on Wednesday.

Among the comments posted was one called for people to "quit with the blaming of Wuhan for COVID-19". Another suggested critics "take responsibility for our own failure".

Tang said the photos were taken on Saturday, when about 20,000 people visited the water park.

"We are surprised that people are so interested in Wuhan having a music festival. Wuhan is a very safe place, thanks to the concerted efforts of its people and medical workers from across the country," he said.

"Almost all people in the city have been tested for the novel coronavirus, and we have not seen new cases for a long time. We are getting back to normal life, and the city is becoming better and better."

The park has taken strict pandemic control measures, such as limiting the number of people to 50 percent of maximum capacity, thorough sterilization and sanitation of public areas and checking the temperatures and apps that indicate the health codes, or condition, of all visitors, he said.

Water samples from the park have been tested for coronavirus, with all results coming back negative, Tang said.

Wang Yongli, who lives in Wuhan, said her family started to go out only in late May, more than a month after the city lifted its lockdown.

The family felt safe carrying their 4-year-old son out of the house after the city conducted nucleic acid testing of all residents in June. They took him to the water park as temperatures rose in July, she said.

"Although life has returned to normal in the city, people in Wuhan are very mindful of the pandemic, and many people still wear masks in public and wash their hands frequently," she said. But she added, "It is unreasonable to blame people for not wearing masks at the pool."

More than 60 car brands and 800 models were featured at the city's five-day Central China International Auto Show that started on Thursday, marking the first offline large-scale exhibition in Wuhan since the city lifted its 76-day lockdown on April 8 as the COVID-19 outbreak waned, said Zhang Jun, secretary-general of the event's organizing committee.

The number of auto show visitors increased by 20 percent from last year and the total sales volume reached 3.52 billion yuan ($510 million), he said.

All visitors to the auto show must show their health codes, wear masks and have their temperatures checked, and people with coughs and temperatures higher than 37.3 C were not admitted, he added.

Hubei lowered its emergency level for the pandemic from the second-highest level to the third-highest on June 13, and Wuhan has not reported any new confirmed cases since mid-May.

On Aug 8, the province launched a campaign to revive its tourism sector, with nearly 400 A-level tourist attractions offering free admission to domestic tourists as a token of gratitude for the nation's assistance to the province during the COVID-19 outbreak.

Almost 2.7 million people visited the attractions during the first week of the campaign, with almost 400,000 people visiting as part of group tours arranged by travel agencies, 32 percent more than the total number of visitors from April to July, the Hubei Culture and Tourism Department said.

Liu Kun in Wuhan contributed to this story.