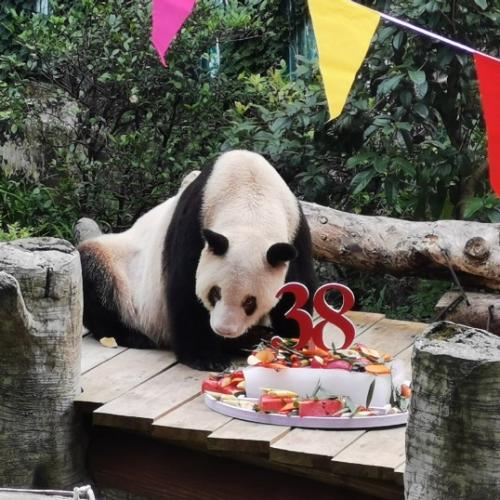 By Tan Yingzi in Chongqing | chinadaily.com.cn

The Chongqing Zoo threw a birthday party on Sunday morning to celebrate the 38th birthday of Xinxing, the world's oldest giant panda living in captivity.

The female panda is expected to break the Guinness World Record for the longest living giant panda set by Jia Jia, which passed away on Oct 16, 2016 in Ocean Park Hong Kong, about two months after she turned 38.

"At 38, Xinxing has reached the equivalent of about 110 to 130 in human years," said Yin Yanqiang, the zoo's panda expert."There are less than 30 giant pandas in the world that have lived past the age of 30."

The celebrity panda is in good physical condition and keeps her weight at 90 to 100 kg. She eats seven meals a day, including 30 kg of bamboo shoots, 1 kg of bamboo leaves and some fruit.

Xinxing, born in Sichuan province in 1982, was rescued in the wild and sent to Chongqing Zoo in 1983. She visited Calgary, Alberta in Canada during the 1988 Winter Olympics, where she attracted over 1 million visitors.

In addition to her longevity, she is also a "hero mom" giving birth to 10 children and is the matriarch of a huge family of 153 pandas.

Her offspring are spread across the globe in more than 20 countries and regions, including the United States, Canada and Japan.