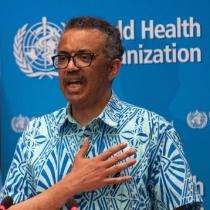 WHO chief: Learn lessons from pandemic

While delivering a commencement speech by video link to the class of 2020 at Tsinghua University School of Economics and Management in Beijing on Sunday, he said: "My hope is that the defining crisis of our age will likewise remind all people that the best way forward－the only way forward－is together.

"COVID-19 is teaching us many lessons, and chief among them is that health is not a luxury item. It's the foundation of social and economic development."

The pandemic is much more than a health crisis. It has exposed the political divisions and the social and economic inequalities of our world, Ghebreyesus said.

Millions of jobs have been lost, and the global economy is headed for its sharpest contraction since the Great Depression. For all the economic, military and technological might of nations, the world has been thrown into turmoil by a microscopic microbe, he said.

The world spends trillions of dollars preparing for a terrorist attack, but historically has spent relatively little preparing for an attack by a virus, which as we are now seeing, can be far more deadly and far more damaging economically, politically and socially, Ghebreyesus said.

"All countries have been affected, rich and poor, large and small. The pandemic will shape the world for decades to come, and it will shape your lives and careers too."

Too many countries spend too much of their health budget on managing diseases in hospitals, where the costs are higher and the outcomes are often worse, instead of promoting health and preventing disease at the primary healthcare level, he said.

He called on countries to make a crucial shift, to focus on promoting and protecting health, rather than only treating disease.

Whatever lessons there are to learn from this pandemic, the greatest failing would be to not learn from them and to leave the world in the same vulnerable state it was before, he said. If there is anything positive to come from this, it must be a healthier, safer, fairer and more resilient world, built on the foundation of equity and solidarity, he added.

Yan Zilin, a graduate of Tsinghua University School of Economics and Management, said she was greatly inspired by Ghebreyesus' speech.

"The year 2020 is a year full of challenges, and I have been wondering about how I can contribute to the fight against the pandemic," she said.

"Mankind is a community with a shared future and graduates like me should have broader perspectives and shoulder our responsibility to tackle the common challenges facing us all."

Qian Yue, another graduate of the school, said that as a major in business management, she will focus more on how to persuade consumers to make more environmentally friendly decisions and persuade businesses to pay more attention to corporate social responsibility.