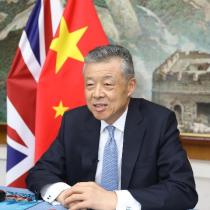 Money raised through the China-UK Charity Initiative will fund a medical clinic in one of China's poorest counties and take Sino-British cooperation in the fight against poverty and COVID-19 to a new high, China's ambassador to the United Kingdom has said.

The money was collected from the Chinese and British business communities in the UK by the charity, which was jointly established in December 2018 by the China Chamber of Commerce in the UK, which is also known as CCCUK, and The Lord Mayor's Appeal.

Speaking at a virtual event on Thursday to mark the donation, Liu Xiaoming, China's ambassador to the UK, said the initiative has played an active part in supporting charitable projects in both China and the UK.

"This charity project we are marking today will provide medical and epidemic prevention services to more than 2,400 local villagers," Liu said. "It is a demonstration of profound friendship between China and the UK. It is also a showcase of our joint response to COVID-19 and a vivid illustration of our shared commitment to building a global community of health."

Since the novel coronavirus outbreak began, the two countries have supported each other and engaged in closer cooperation, Liu said.

"This charity project is a new highlight in the China-UK joint response to COVID-19," he added.

The ambassador said he is confident the China-UK Charity Initiative will always strive on behalf of both nations to alleviate poverty and promote economic and social progress.

Vice-Foreign Minister Qin Gang said from Beijing: "Over the year, the Chinese Foreign Ministry has developed a pairing relationship with Jinping county in Yunnan province to support the local poverty relief."

Qin said the government takes poverty reduction very seriously, and was heartened to learn that, on May 17, Jinping county officially emerged from extreme poverty, something Qin described as a "historical milestone".

Nationally, the number of people living in poverty was reduced during the seven years that started in 2012, from nearly 100 million to 5.51 million at an average of 13 million people a year.

"No other country has ever lifted nearly 100 million people out of poverty in such a short span of time," Qin said.

Lord Mayor of the City of London William Russell also hailed the initiative.

"We are here to celebrate the partnership of The Lord Mayor's Appeal and the China Chamber of Commerce in the UK, a partnership which has already done so much to support the communities through this pandemic, including the huge support given by Bank of China and members of CCCUK to The Lord Mayor's Appeal in their procurement of personal protective equipment for British healthcare workers early this year," Russell said.

He also thanked corporate partners and said he was pleased the initiative is easing poverty in Yunnan province.

Fang Wenjian, chairman of the CCCUK, said the clinic project is a continuation of hope, of love, and of Sino-UK friendship.

"Last year's charitable project has helped a rural school in Shaanxi province to build a multifunctional hall, which has enriched the school's teaching resources and brought hope to the future development of the children," Fang said. "This year's Yunnan project will also help improve the healthcare in the village, bringing hope to local people by improving the quality of life."

Fang said the novel coronavirus pandemic has demonstrated how closely the world is interconnected and how collaboration to tackle problems is the right way forward.

"The relationship between the UK and China will continue to grow, despite all the challenges," Fang added.