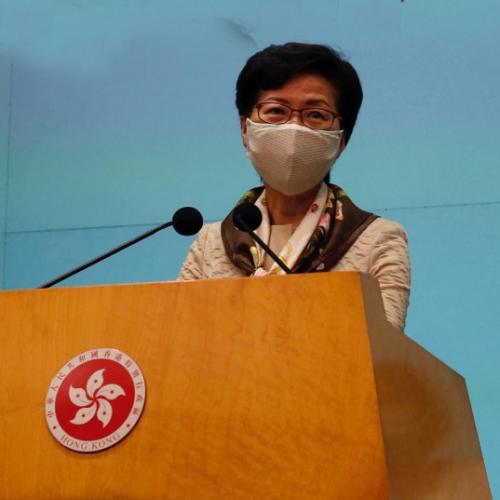 Security law needed after SAR failed to deliver its own version, Lam says

Hong Kong Chief Executive Carrie Lam Cheng Yuet-ngor on Tuesday stressed "categorically" that there is "absolutely no change" in the central government's policy toward the special administrative region.

Lam said that the policy, which is the successful, comprehensive and accurate implementation of "one country, two systems", is enshrined through the establishment of the HKSAR and repeatedly stressed by State leaders.

"National security should be very much a core part of that comprehensive and accurate implementation of 'one country, two systems', because everybody, every country needs national security in order to safeguard the interests of the country," Lam said.

Speaking to the media before the weekly Executive Council meeting, Lam said there is no deviation or shift in the policy.

"If there is any deviation or breach, that is our incapacity or inefficiency in enacting local legislation on our own to safeguard national security," she added.

Lam's remarks were backed by Zhang Xiaoming, deputy director of the Hong Kong and Macao Affairs Office of the State Council.

In an online seminar on Monday organized to mark the 30th anniversary of the promulgation of the Basic Law of the Hong Kong SAR, Zhang pointed out that when Hong Kong puts in place systematic safeguards for national security, the SAR will have more leeway in the practice of the "one country, two systems" principle and could thrive again by making the most of the advantages brought by the principle.

But Zhang also pointed out that threats to national sovereignty and security in Hong Kong have become the most obvious stumbling block to the successful and accurate implementation of "one country, two systems", Lau said.

These threats include internal and external forces confronting the central government, not accepting Hong Kong's return to the motherland and people attempting to turn the city into a base for undermining national security, Lau noted.

Thus, the central government must remedy "one country, two systems" by introducing a national security law for Hong Kong after the SAR failed to fulfill its duty as required by the Basic Law for 23 years to crack down on hostile forces in the city, Lau remarked.

The law aims to close a long-standing legal loophole in national security in Hong Kong, which reached its height during the prolonged social unrest since June surrounding a now-withdrawn extradition bill. Tuesday marked one year of Hong Kong's anti-government protests, which began on June 9.

A chaotic, unstable and ungovernable Hong Kong is not something that the late State leader Deng Xiaoping outlined in the beginning, Lau stressed. Zhang's speech served as a warning to those who oppose the central government, that they should support the legislation, accept the "one country, two systems", and better handle the relationship between the SAR and the central government, Lau noted.

Tam Yiu-chung, a member of the Standing Committee of the National People's Congress, said Zhang's speech underlined the necessity of national security legislation, which aims to put the SAR back on track rather than tighten up the city's well-established rights and freedoms.

The central government needs mutual interaction and trust from the SAR in the successful implementation of "one country, two systems", Tam stressed. When the legislation is in place and Hong Kong's peace is restored, the city will surely enjoy better development and stronger support from the central government, he said.