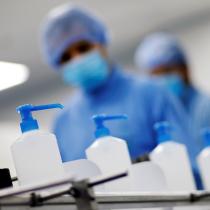 Disinfection products were generally not perceived as necessities by Chinese consumers until the beginning of the COVID-19 epidemic. Since then, people have become more aware of the benefits of proper hygiene and home cleanliness, and therefore more potential is expected for producers and suppliers of such products, industry insiders said.

Epidemiologists say COVID-19 has been mainly transmitted via coughed or sneezed droplets, or when people touch contaminated surfaces and then touch their nose, mouth or eyes. Experts also said the virus cannot survive after making contact with disinfectants containing more than 75 percent alcohol. They have therefore made repeated calls for more conscientious personal and household cleaning habits.

Disinfectants, hand sanitizers, bathroom cleaners as well as alcohol-based gels and wipes have all seen a surge in sales after initially facing domestic supply shortages in the early stages of the outbreak, with some consumers engaging in hoarding behavior due to restricted mobility.

However, only 28 percent of Chinese consumers bought disinfectants in 2019, below the proportion in Europe and the Americas, according to a Kantar report last month. The figure was 50.2 percent in the United Kingdom and 35.2 percent in France, it said.

"The epidemic has changed many people's habits. Awareness of hygiene will remain high even after the epidemic ends, and will therefore create long-term growth of relevant businesses," Ye said.

She added the sector will benefit from an increase in households with children due to the relaxation of the family planning policy in 2015.

Askci Consulting Co said the output value of disinfectants in the Chinese market is expected to grow 13.7 percent to surpass 11.5 billion yuan in 2020. The annual growth rate was about 5.5 percent from 2015-2018.

Xu Xiaodong, vice-president of Chinese cleaning products manufacturer Liby Group, said sales of its disinfectants, including those used for furniture, clothes and personal hygiene, surged by more than 200 percent during the outbreak.

"The niche sector features great potential as consumers have got a better understanding of it," he said, adding the company is also developing products targeting overseas consumers as more than 200 countries and regions have reported infections.

Li Daxiao, chief economist at Yingda Securities, said such products may also be in short supply overseas, currently facing the same crisis as Wuhan did earlier this year.

According to Tianyancha, a Chinese corporate data provider, the number of firms involved in the disinfectant business reached over 100,000 nationwide by March end.