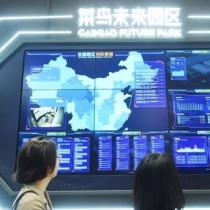 Delivering goods, remote working and tele-medicine have gone viral during the novel coronavirus outbreak, and the booming of new business models has stimulated enterprises to accelerate digital transformation for better company management and customer service, which further promotes the upgrading and optimization of the Chinese digital economy, according to Wang Wenjing, the chairman of Yonyou, China's leading software company and cloud service provider.

In the past two months, the catering industry has been severely stricken by the epidemic with offline sales declining sharply, while restaurants are altering their operation strategies, in a bid to explore business opportunities in the online market.

Haidilao, the renowned Chinese hotpot chain restaurant, closed its 550 offline stores during the virus outbreak, but moved the majority of its business to online platforms. The restaurant has resumed delivery service since Feb 15 in Beijing, Shanghai and several cities in China. Two weeks later, Haidilao released its fast food packages for sale online, and livestreamed eating hotpot on e-commerce platforms, attracting 2 million viewers in four hours.

To monitor restaurants operation on a real-times basis, Yongyou cooperated with Haidilao to build up the HUO-SaaS platform, offering a all-in-one management of different application scenarios including front desk, kitchen, store with data analysis on dishes, orders, income, staff, etc.

According to the China Cuisine Association, the catering industry in China is transforming its developing route from continuous expansion to intensive growth based on customization and digital service.

With the construction of smart cities, information and digital technologies such as 5G, internet of things, big data, artificial intelligence and blockchain will play an increasingly critical role and be widely applied in restaurant management.

"In the short term, the epidemic will definitely have a negative impact on restaurants, but it offers an opportunity for the industry to transform," said a report jointly issued by the China Cuisine Association and Deloitte.

"First, the catering industry will accelerate its digital transformation, which could empower restaurants to improve operational efficiency in supply chain and marketing channels. Second, the customer group could be enlarged to both online and offline." The third point, noted in the report, "new consumer habits are emerging under the influence of the epidemic, which stimulates the boom of new business models, such as noncontact and individual dining. "

In terms of the retail industry, delivery orders for goods soared as traditional supermarkets all developed online sales channels via apps, WeChat mini programs, and other offline-to-online food delivery platforms like Meituan and Ele.me.

Carrefour, the traditional retailer, faced with increasing demand of vegetables and meat during the Spring Festival vacation, has upgraded its delivery service coverage to a 10-kilometer radius, and ensured a sufficient food supply based on big data systems, cited an interview by Zhang Jindong, the chairman of Suning, from National Business Daily.

"During the virus outbreak, the stay-at-home economy has emerged, which is pushing forward the rapid development of e-commerce platforms serving daily needs that combine online and offline," Zhang said. "The thriving demand brought by the stay-at-home economy will force enterprises to optimize customer service and speed up the digital transformation."

Remote working, tele-medicine and online education have also been springing up during the epidemic period. Digital and information-based tools provide solid support for companies to resume work and production.

DingTalk, an all-in-one mobile platform developed by Alibaba Group, has been widely used among workers and students. According to a DingTalk official, over 200 million employees from 10 million companies are working online via this platform, and an estimated 50 million students use DingTalk to have remote classes.

According to the China Academy of Information and Communications Technology, the scale of the digital economy in China has been estimated to hit 35 trillion yuan, accounting for 35.4 percent of the total GDP in 2019. The digital sector has already become the new driving engine of the Chinese economy, and will continuously promote the optimization and upgrading of the economic structure.