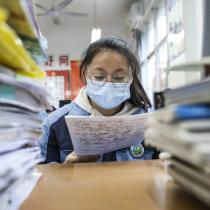 The national college entrance examination, or gaokao, will be postponed for a month to July 7 and 8 due to the novel coronavirus outbreak, the Ministry of Education said.

Because of the epidemic situation, authorities in Hubei province and Beijing can come up with their own suggestions on gaokao dates, which will be published after consulting with the ministry, it said in a notice on Tuesday.

Wang Hui, director of the ministry's Department of College Students Affairs, said the postponement is mainly to ensure students' safety and the fairness of the exam.

More than 10.7 million students have signed up to participate in this year's gaokao, up by 400,000 from last year, Wang said at a news conference.

"Gaokao concerns tens of millions of students, and the ministry must adopt the most prudent plan with the least amount of risk to protect their safety as well as that of the teachers."

As senior high school students have been taking online courses during the epidemic, many rural students who lack internet access might feel disadvantaged, so the delay is to ensure they will have more time to prepare for the exam at school, he said.

The ministry will also postpone student admissions and the new fall semester for a month, he added.

The gaokao, one of the most important exams in the country, has been held every year from June 7 to 8 since 2003.

In 2001, the ministry decided to move the gaokao earlier by a month from 2003 due to hot weather and frequent natural disasters in summer.

Chinese people often compare the highly competitive exam to "crossing a narrow bridge", because for many students, especially those from rural areas, enrollment at a good university is a difficult but worthwhile challenge that could shape their future.

There are around 1.6 million Chinese students studying overseas, and 1.42 million of them are still abroad, Liu said.

Chinese embassies and consulates have provided epidemic prevention and control equipment and psychological support to these students, she said.

Meanwhile, the ministry is actively communicating with foreign education departments and universities to safeguard the rights and interests of the students and urge them to treat Chinese students fairly and accommodate them properly, especially during school shutdowns that have occurred in some countries, she said.